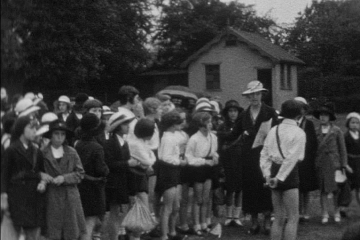 Summary: This film from Bromley Local Studies and Archives shows scenes of various sports day at St John's Penge. It is thought the film maker may be Mr Cyril Rickert who was local to the Penge area during that time and was know to be a film maker, but this can not be confirmed.

A large playing field(possibly Penge recreation ground? or Royston Fields?),in the distance we see a large number of school children dressed in school gym kits start a race, the field is marked into running lanes. On the horizon we see the outline of a church ( possibly St John's Church Penge?). As the children come into view we can see that we are watching a skipping race, with a clear winner as a young female pupil skips and races across the finish line!

A number of female pupils are in white shirts and running shorts and are in a line frantically getting dressed(perhaps into their full uniform), along the side of the field we see a number of spectators-they are formally dressed-the women wearing 'city' or 'metroplolitan' style dresses and a large number of 'slouch' hats are worn. As soon as the students are dressed they run towards the finish line, they also have the added challenge of opening an umbrella as they run, and some of the umbrellas are clearly more durable than others!

Male students participate in the same race activity perhaps not as quick as their female counterparts!

A relay race is in process three girls dressed in white gym shirts and running shorts wait to tag their race partner, the girls wear slashes(perhaps denoting different school houses?) in the distance we see a couple of large tudor style buildings(possibly Royal Waterman's Almshouses Penge?), the girls wave encouragement as their race partners come into view, tag, and race off, we see two young boys race into view as their running partners take off.

A group of younger girls are dancing in a circle, then take part in a dance, half of the girls are in their gym kit, the other half are in school uniform dresses. The dance is elaborate and watched by appreciate spectators and children. One of the girls is dressed in a very fine dress(perhaps a May Queen?), and the dance becomes more formal as the dance partners bow and curtsy to each other. In the background are terraced houses.

A playing field (Royston field?)A number of female students appear to be tackling an assault course, crawling under wire meshing, they are watched by two judges, as they then tackle a variety of activities, the last of which appears to be hitting a small ball with a very small bat!

We see a wheel barrow race in full flow, which is proving challenging to a number of the girls, in the distance we see a distinctive church spire(St Johns?).

A variety of unusual races are seen, involving three large groups of boys who are moving 'scum of people' in a straight line, a race involving two students, one of whom hops while leading the other who is crawling blindfolded!, while a large group of girls are trying to race by steeping on flower pots, this proves particularly challenging!, and a group of girls prepare for a race which requires them to balance a book on their head. In the distance we see a very distinctive Gothic church tower (Penge congregational church High Street?)

Relay race is in full flow-we see teams racing up and down the track marked on the playing field, a young girl looks back at the camera as see awaiting her turn, while a man wearing a hat officiates. The various teams can be seen encouraging and cheering the runners during their laps.

A group of female pupils come into view, some are in their gym kit, others are wearing their distinctive school uniform, a teacher is holding a piece of paper while she organizes the girls.

A mixed relay race is taking place, a young boy, unceremoniously ushers some of the spectators away from the camera's view!

The tug of war is briefly seen between two boys teams, adopting the holding positions, while their coaches relay last minute team instructions, as they pick up the rope and take the strain, and heave!

Prizes are being awarded, a woman and man stand behind a small table with small wooden shields and cups. The women(School Teacher-Head of House?) were saw earlier in the film with the group of students, proudly steps forward to accept a shield. A photographer ushers them into place behind the table for the all important picture! A young boy steps forward to accept an award, he is smartly dressed in his school blazer, his white shirt collar folded outside his jacket,and proudly smiles as he accepts the shield,applauded by the spectators.

A shoolgirl accepts a silver cup, and talks to the dignitaries.

Various views of different races on a schools sports day. The field is marked out with white running lanes and it appears to be a sunny day, a number of girl and boy students are racing in an egg and spoon race, carefully safeguarding their eggs or retrieving those that have been dropped!

The long jump competition is underway, a number of girls race to the wooden jump board and lift off towards the camera, a smartly dressed woman with a white hat carefully measures were the jumpers have landed,she is joined by another official who admires the jumpers and their efforts.

Various races are seen including the hurdles,walking on stilts and flowerpots, and various relays.

In front of a large audience of pupils a woman hands out the sports day prizes to various pupils, by her side is a man who reads out the winners.