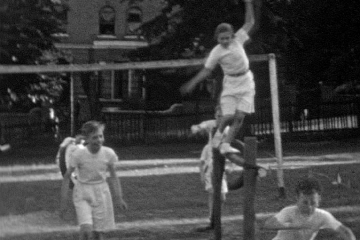 A Group of children of all ages stand next to a car eating, and they pose for the camera.

On a large playing field we see a number of children of all different ages participating in a range of track races,around the playing field are some large four storied houses, and the pupils can be seen racing towards the finish tape! A man with a pipe officiates at the line and applauds the efforts of the pupils. A high jump event is taking place and a number of pupils straddle the bar, they wear very smart gym whites and dresses and each competitor wears a ribbon, perhaps denoting their school house? Bunting has been hung above the area, and in the background we can see a large building, perhaps the school building?, with large banner flags hanging out from a number of the windows.

We see a range of races and different events, including the three legged race, egg and spoon race(more difficult than you think!), and a group of boys are apple bobbing, watched by a master who is being entertained by their antics. A group of boys are tackling an assault course, which includes some crawling through wire netting and leaping through suspended tyres!

The pupils are now participating in a sack race, and a boy falls down causing a girl to bump into him and fall down, as they get up she looks a little accusingly at him!

A group of adults-parents or teachers are now joining in the event, a group of men race to the line,they are all smartly dressed with shirts and ties which doesn't seem to appear to affect their performance! A group of women are racing expertly in the egg and spoon race,although the ladies with the hats perhaps understandably are at the back of the field!

A group of parents are sitting on the edge of the playing field getting ready to watch the awards being presented,on a decorated table are some impressive shield trophies and two boys frame the picture at both ends of the table and admire the trophies.

We see scenes of other events, including a bicycle discipline, and various tug of war heats. The children are now relaxing with the parents and an older pupil is handing out sandwiches to the guests.

A group of four children are sitting on the ground looking at the camera, a young girl looks a bit sad, and the older girl cheers her up and makes the other two boys laugh in a delightful scene. The same group are seen playing, and the young girl plays up for the camera.

A group of pupils are seen undertaking a keep fit drill, and a perfectly co-ordinated, apart from one small child who looks on. In the background we see a Union Jack flag which is mounted on the field. We see another group of pupils being led by a teacher through a keep fit routine.

More scenes of races at the finish line, a young girl races to the line and throws up her arms in delight at winning! In a boys race a competitor falls just short of the finishing tape and rolls dramatically along the ground. Other events featured include the high jump and there are some scenes of the pupils jumping in slow motion, and a hopping race which proves challenging for a few of the pupils!

Afternoon tea is being served two waitresses are serving tea and sandwiches to a group of adults and children.

A group of children pose by a table that contains a number of trophies. An intriguing scene which features children cradling and cuddling three black cats. The parents are now participating in a couple of races including the egg and spoon, a woman looks disappointedly at her soon which no longer holds an egg!

Pupils are now tackling the assault course which includes crawling through wire netting and balancing on a pole! To girls are sitting on a log and engaging in a pillow fight, egged on by the spectators!

Further information: It is thought the film maker may be Mr Cyril Rickert who was local to the Penge area during that time and was know to be a film maker, but this can not be confirmed.