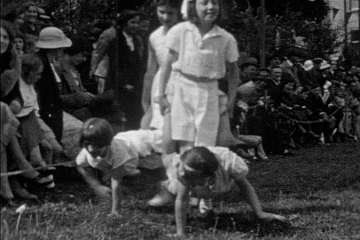 Summary: A delightful film showing everyday life in Belvedere House School, Upper Norwood. The pupils can be seen at play and in the classroom.

Scenes of people arriving at the school,perhaps for the start of term, an impressive looking black car(registration XO 6078) is parked which is loaded with luggage and trunks on the roof, two men prepare to off load the luggage.

Children in school uniform are on tricycles and go carts riding down a small hill away from the school buildings; children chase a car which arrives arrives and parks.

Three children(two boys and a girl) ride a Go kart down a track road, and we see the Go kart upturned as the children look at the camera with an expression that says 'it wasn't our fault!

A number of schoolboys and perhaps a master pull a large hand roller across a playing field, the master gives one of the boys a playful kick to encourage the pulling!

Girls in coats playing in a playground, they jump and dance, and lark around. A group of boys are getting snacks from a small wooden hut.Two girls are playing leapfrog on grass, a man joins them with a small boy and they preform some gymnastic routines for the camera.

A boy pulls some faces and performs a routine for the camera! A cricket game is taking place with boys, girls and a number of women are batting, dressed in long dresses and hats! They face some hostile bowling extremely well and runs are scored!

Two girls walk down a wooden staircase (attached to outside of building) and pose for the camera.

Back to a brief scene of the cricket game.

In the classroom,a young girl raises her hand to ask or perhaps answer a question, as a few moments later she raises her hand again and looks as if she knows the answer to an easy question!

A few brief scenes follow of a sports day, the children are wearing a gleaming white sports kit for the event. In the classroom we see children studying and writing in their exercise books supervised by a teacher. They stand, put their hands on the heads for the camera!

Back at the sports day we see a number of girls tackle the high jump,and at a water jump, a teacher smoking a pipe splashes one of the competitors, who carefully entered the water and tried to avoid getting wet!

The sports day also includes a wheel barrow race which is enjoyed by all! Next up is a talent show or school concert, on a wooden stage bedecked with flags of the world and a piano in the corner we see a range of routines and dances expertly performed.

In the playground a netball game is in full flow, watched by three girls on a first floor landing.

A number of the pupils are sitting in an external staircase,with their books and are joined by a master,a young boy smartly dressed in a suit in a large scout hat smiles at the camera and salutes! Another group are at the bottom of the stairs and one pupil takes pictures.

An internal swimming pool with wooden panels along the wall, a large group of pupils are in the water, bobbing up and down.

We see the girls leaving the swimming pool, they are very smartly dressed on blazers and are carrying their towels, the girls wear straw hats and the boys caps.

A teacher is ushering the pupils onto a tram-the conductor helps the children inside and some make their way onto to the top open deck. We see the children on the top deck as the vehicle moves forward on a beautiful sunny day. They leave the tram with other passengers and in the background a passenger waiting room/stop can be seen with a London Transport logo, which can also be seen on the side of the tram.