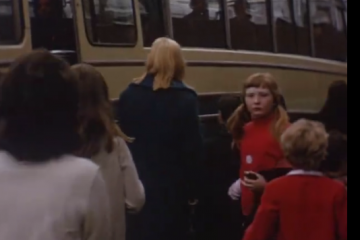 Summary: Amateur film of the annual summer day trip to Canvey Island by the residents of the Brandon Estate, Southwark.

Description: Modern tower blocks set amongst landscaped land. It is a grey day and a gentle breeze blows the branches of a leafless tree. There is a shot from the side of one of the tower blocks, showing windows and enclosed balconies. In front of one of the tower blocks is a Henry Moore sculpture - Two Piece Reclining Figures No 3 1961. An aerial shot of the estate shows the extent of modern housing development in the area. One one of the low rise flats has a gracious sweep to its structure and there is planting in the front of it. We can see a coach on a road, at the side of a small shopping precinct.

Intertitle: A Day At The Sea

Intertitle: or 'Ave A Blow Bill

Under the titles there is 'Pathe' screen footage fanfare sound, then the music changes to the Beatles, Ticket to Ride.

Two shots of the 'Beatles For Sale' album - front and back covers. The front of the coach is seen. It is a Bedford Bella Vega coach, that has the name 'StarDuster', where the number plate should be. The number plate FML 516B has been moved up onto the radiator grille.

A young woman in a white cardigan is with a group of children, as they mill around by the coach door. Two of the children are wearing bright red jumpers, and the girls has a distinctive 60's hairstyle of fringe and and two 'pigtails' covering her ears. There is an older man in a trilby and jacket with a clipboard. A woman with a blonde beehive hairstyle is crossing the raod with her two small children. They all look very smart and the girl is clutching a picture book. There is a shot of people in the flats on their covered balconies.

Inside, there are people and two children in hand knitted jumpers are a table full of trays and used white crockery. An older woman in a summer suit holds a baby on her lap whilst she drinks a cup of tea. We see people leaving the canteen and making their way back to the coach. The children look excited and wave to the camera. A shot from within the coach as it is driving along, looking at a coach ahead. The weather still looks grey! We are now in the 'Starduster Coach' and we see mainly women and children in the coach and the coach driver. On the map the route is marked out along the route they are taking - ending at Benfleet and Canvey Island.

Fantastic shot of children on mechanical horses by an amusement arcade. There is a Afro/Caribbean/ African young boy standing behind these rides. A woman with a beehive is supervising the childen and the girl on the horse has a noticeable large white ribbon in her hair. You get the feeling that the trip was a 'proper' day out for many and they have made an effort in dressing up for it.

Shot of family group outside casino/amusement arcade. Lots of signs along the front of the bulding including 'speedway' and candy floss'. The family are buying candy floss. Illuminated sign saying 'Fresh Peanuts, Popcorns, Toffee Apples and Candy Floss'. There is a small girl with a massive candy floss - her mother is trying to tie her hair back as she eats it. Entrance to a bingo hall. Inside there is a row of women in front of bingo boards. There is a girl in a pushchair in an overcoat outside, whilst the womem are playing bingo. Both the women and the children appear to be wearing identifying badges. The soundtrack stops and ther is then natural ambient sound from the amusement arcade and park. A girl stands in front of some attractions- Hall of Mirrors that costs 6 old pence for an adult and 3 old pence for a child. Another attraction is 'Laughs in the dark' . We see children on a helter skelter with a mat and a man by the side of the dodgems giving his sons(?) money for the ride/s. There are different shots of different fairground attractions. There is a great shot of a ride from the air of a carousel ride that elevates called 'Thriller'. We see people having been on the ride, holding their head and smiling. Lovely shots of the top and bottom of the Helter Skelter and a great one as someone goes down it from their point of view. There is a ride called 'Wild Mouse' which is a roller coaster. We see the same young woman who was holding her head after another ride, getting on the 'Wild Mouse', along with another carrage with three children in it. Fantastic shot from the Wild Mouse as it begins the ride. Lovely shots up and down and round the track and then shots of other carriages with people in it.

We are now at the dodgems, lovely multicoloured cars driven by children and adults. A scene by a building with 'saloon' on the window. A group of women with bags and pushchairs and children are outside. A woman with an amazing beehive covered in a scarf, is smoking and drinking half a pint of bitter or a coke.

Shots of older and younger members of the party outside of arcade and eating candy floss.

A group of women are larking around dancing and lifting up their skirts, whilst on another part of the green they are on, a family is sitting quietly, watching as their children play, rolling down the hill etc. Shot back towards the building where the coach had been parked at the top of the beach. A woman walks along a path at top of beach with her children, whilst other woman are putting up deckchairs on the beach, another helping her small child into a bathing costume and others are sitting in deckchairs by the sea edge and by the sea wall. Groups of boys are playing at the seashore, shrimping with buckets and building sandcastles. It is clearly breeezy and chilly as children have jumpers and vest on over their swimming trunks and women and girls have jackets and cardigans on .Lots of activity on the beach and paddling, with boys splashing each other with their shrimping nets. A group of Afro Caribbean/African boysand girls are in the sea. They have red swimming hats on, their mothers looks on from the top of the beach looking cold! Boys digging a hole on the beach, girls with their dresses rolled up into their pants, paddle in what looks like a marked of sea paddling area. A group of men and boys are blowing up an inflatable dinghy... making it look like hard work.

A street scene. Three men are walking by a 'Mobil garage'. They have the inflatable dinghy and are going to use the tyre pump at the garage to inflate it! One of the men walks out of the garage in the direction of the beach, with the dinghy on his back. We see him go onto the beach whilst people look on. We see three boys in the boat, which seems to be semi- sinking, whilst an older man is getting changed at the top of the beach, whilst his daughter(?) holds a towel in front of him. Amusing, as the wind is blowing the towel. Larger group of children play with the dinghy. The man who was changing, shoos the children from the boat and gets in it and lies down. One of the boys appears to open a valve on the boat, which then starts sinking. The man hams it up as he drags the boat up onto the beach and falls down. An ambulance man appears to be giving him life saving exercises. We then see him in shirt and shorts and socks walking away, with two other man, carrying the deflated dinghy. More shots of the busy beach, full of activity and people. The film finishes as two young woman walk past the camera. The camera appears to linger on their rear view...

Further information: The Brandon Estate was built in 1958 and housed people from Bermondsey whose houses had been demolished in slum clearance. The residents formed several clubs, and the cine club filmed events run by the social club, which met above the library. Filmmaker Brian Waterman joined the cine club age 17 and bought his camera with his first pay packet (he worked for London Underground).