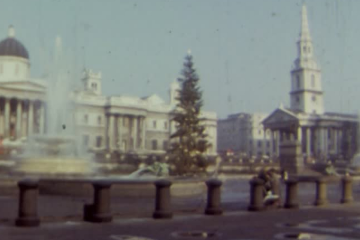 Summary: Amateur film of the famous sites of London.

Description: The film opens with shots of Trafalgar Square, where the fountains are accompanied by the Christmas tree gift from the City of Oslo. A sculpted nativity scene within a model wooden barn structure sits underneath. Some horse drawn carriages drive past the National Gallery. At Piccadilly Circus, there's a scan over the advertising lights, which are still colourful by day. The companies represented include Coca Cola, Guinness, Players cigarettes, BP, Skol lager and Double Diamond beer. This is followed by close up of the Shaftesbury Monument Memorial Fountain, and the Anteros statue (commonly known as Eros). Christmas lights are filmed above Oxford Street and on the seasonally decorated frontage of Selfridges department store, which features a model of Santa's reindeer pulled sleigh over the central entrance. Some dark night time views of the fountains in Trafalgar Square precede the brighter neon lights on West End streets. The façade of the London Pavilion is shown with a massive illuminated hoarding for the James Bond film 'Thunderball' and Piccadilly Circus's advertising appears again now lit up, including panels for Coca Cola, Guinness, Players cigarettes, BP, Skol lager, Double Diamond beer, Air India, BOAC airlines, Wrigley's chewing gum, Max Factor cosmetics, and Gordon's Gin. At a different time of year there are views of the River Thames, with river traffic and riverside buildings including the Houses of Parliament and the headquarter offices of W.H. Smith. A shot east down High Holborn includes the half-timbered Tudor building of Staple Inn. The nest shots show the frontages of St Pancras station and King's Cross station on the Euston Road. Then it son to the City Of London, with Mansion House and the Bank of England. At Earl's Court there are views of an exhibition (possibly the Ideal Homes Exhibition). Westwards again to Victoria Tower Gardens to film the Buxton Memorial Fountain and the reproduction of August Rodin's sculpture 'The Burghers of Calais'. Nearby the film captures the statue of Oliver Cromwell by Hamo Thorneycroft outside the Houses of Parliament and the statue of King Richard I by Westminster Abbey. This is followed by film of a television set showing a royal occasion with the Queen, Prince Philip, Prince Charles and Princess Anne in horse drawn carriages. Direct filming of locations recommences in west London with shots of Battersea Power Station, Chelsea Bridge, and Battersea Park, which is hosting a fun fair and the Guinness Festival Clock. The Royal Hospital in Chelsea hosts the Chelsea Flower Show and the film records flower displays in a marquee, some of the show gardens, and the retail area. More sights of London appear briefly, including Buckingham Palace, the Mall, St. James's Park, Waterloo bridge, the Royal Festival Hall, Shell Centre, Cleopatra's Needle, Charing Cross Station and the Houses of Parliament.

Further information: Title on box is London No. 4 Old/New; title on spool is London: Something old & new. The film appears to be a compilation of material filmed in the 1960s and 1970s.