From Greenhill to Marlborough 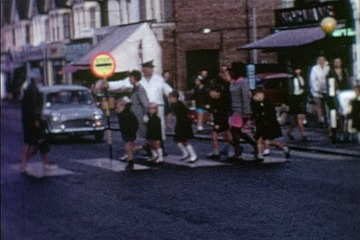 Summary: A film of primary school life in the 1960s and the move from a Victorian school building to a new modern school.

Description: Opening Title: From Greenhill to Marlborough by F Barrington

A medium sized Victorian school on a sunny day, a building with two chimneys the apex of a building is viewed with a weather vane. An ornate stone sign states Harrow School Board. View of the school from across the road with a joining houses and a pedestrian crossing.

Young schoolchildren cross at the pedestrian crossing shown across by a Lollipop Man with a stop sign in the background is a high street with lots of local shops, parents lead their children towards the school gates. Children file into the school smiling and looking at the camera.

A schoolgirl hangs up her satchel on a red coloured coat and bag rack set against a white brick wall in a large cloak room. A crate of full milk bottles is seen on a parquet school floor, three children with an adult are talking to a teacher behind the desk, perhaps taking registration, one child in a blue coat with a hood is restless and is told off by the adult.

A view of the classroom, children are working on two large tables, the children are not in uniform, and appear to be wearing labels with their names on them, perhaps it is their first day of school, an older child can be seen kneeling down and talking to them.

A teacher is sitting and working at the desk she is wearing glasses and a floral print dress, the children are seen in the classroom, some boys are playing with a large fort on the table, in the background the teacher in the floral dress can be seen with the older pupil and another teacher. The children look relaxed and curious, as if it's their first day at school.

Close of a child assembling some sort of toy. A view of a suburban road with terraced houses on one side and the trees and a school barrier and entrance on the other. A white sign on the road states 'School entrance'.

A formal classroom setting, children in school uniform sit on wooden desks and chairs studying, a painted flower mural can be seen on the back wall. A teacher sits at her desk, she is formally dressed and is studying some papers with pen at her, she looks at the pupils.

The new school under construction can be seen on a grey day, the building is progressing, and a young school girl in uniform walks around the building, perhaps inspecting her new school. An interior of a classroom is viewed.

The schoolgirl walks through the building site carefully walking along some planks to avoid the large puddles.

The school canteen at lunch time, the children are eating lunch on a sunny day, the tables are full and their yellow cups and plates appear very coordinated on the table.

The new school construction continues and further progress has been, the new building is taking shape. An interior shot of the new building, which appears to be the school canteen, stacks of school chairs are viewed with the sun streaming through the new windows.

Outside a workman is clearing rubble from the grounds, and in the background a newly laid tarmac can be seen with the new school fence, the school and grounds seem very near completion.

From an old school building a distinguished looking gentleman appears dressed in a sports jacket and trousers, he is seen in profile and appears to be surveying the view around him, perhaps for the last time? He looks wistful and walks towards the exit of the school.

We see a brand new school building, very modern looking, the new yellow doors are framed waiting for the children to come.

We see the interior of the school with a table and flowers on a modern table. A class room scene, a group of children are standing in a circle and appear to be singing, a teacher is seen in the background on a piano.

A view of a classroom with a blackboard and notice boards either side, we see a number of empty school desks with children's jumpers and tops on them. We see a gym class in progress, the children are dancing, running and leaping about,in another class a teacher reads to a group of children who appear in silhouette and appear to be listening with rapt attention, the room has very large windows and is decorated with very colourful paintings and posters, the teacher turns the book and shows the class a page.

Another classroom, the young children are working intently on large pieces of paper, the teacher is viewed sitting at the head of the class, two young boys approach her with work in hand.

Two boys wander up a modernist style staircase, we see a notice board at the base of the stairs.

We see the school kitchens, three school cooks all wearing overalls and hats are cooking beside large new cooking pots, one stirs while another adds ingredients, close up of one of the cooks stirring with a large wooden spoon, steam rises from the cooking pot, close up of a large mixer, and views of baking trays ready for the lunchtime!

View of the new modern dinning room before the children enter, everything is very neat and tidy. Children are seen carefully walking with their plates full of food!

At the dinner table children are seen eating their lunch, it looks as if it's meat and potatoes on the menu, and the children all have have green matching beakers, and are very well behaved!

In the playground young boys play on a wooden slide while in the background school girls are sitting on the concrete ground knitting, close up of the girls knitting some seem to be having problems!

A group of schoolchildren are carefully navigating some gym equipment, climbing over and under wooden frames and poles, a teacher calls the group together.

Perhaps in the afternoon break we see a number of children playing watched over by a teacher.

On a sunny day a teacher with two pupils is putting up a high jump wooden pole and putting down green jump mats in the playground. Pupils can be seen running up to the pole and jumping, some more successful than others!

A group of pupils are seen sitting by the fence awaiting their turn, a teacher in profile wearing sunglasses holds a clip board and directs the pupils, other pupils can be seen practicing the long jump!

Pupils are seen singing inside the school holding their books.

The old school is seen on a sunny day looking very quiet and peaceful.

Further information: Although the film originally had an audio track, this doesn't seem to have survived.