Let's Go to the Fair! 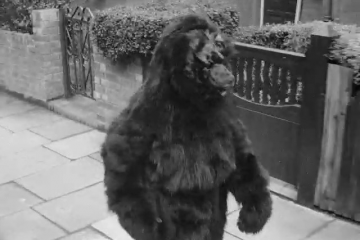 Summary: A lively promotional film for the "many unusual attractions" of the All Saints' Church Medieval Fair, including a dancing bear! And a bear chase! Made for the Rex Cinema in East Finchley (now the Phoenix), which is also featured in the film.

Sign for the Rex cinema at 52 High Road, East Finchley; moving down to the side entrance at the corner of Fairlawn Avenue, where a “bear” emerges from a short queue of people in medieval costume, and runs past the (unseen) camera, pursued by the medieval crowd. The bear runs past early C20th terraced houses in the Fortis Green Road area. The chase (a kind of fancy-dress parade) continues along Fortis Green Road, past the junction with Durham Road. It turns the corner onto Twyford Avenue, where the lead pursuer pauses to pick up something, while the bear opens up a substantial lead. The camera swings round to show a pinned notice on the fence opposite. Closer view of the notice, which advertises All Saints’ Medieval Fair in the Vicarage Gardens on June 28th, promising “Many Unusual Attractions”.

A group of young children in medieval costume sit on the grass by a luxuriant flower bed, one of the youngest turning (clearly against instruction) to smile at the camera while the rest look steadfastly to their right. View from behind their heads, showing a curious springy bird puppet bouncing about in a makeshift puppet theatre. One of the children shares out fruit to the others from a couple of bowls. The youngest girl carries and divides a ramshackle bunch of flowers. There is a small explosion of wrapped sweets in the hands of one boy, by a table laden with bread, buns and iced tarts.

A framed portrait of a soldier in late C18th/early C19th uniform turns out to be one of a number of items (books, glasses, a stuffed black ragdoll, a pocketwatch, a toy caterpillar, a record player) on a stall. Another stall contains pads of Basildon Bond letter paper and envelopes, as well as another notice advertising the Fair.

There is some wrangling among the medieval crowd, as an unfortunate man (in fact, the organiser of the fair) is dragged to the stocks. The crowd grab fruity missiles from a punnet held by a woman in a home-made steeple headdress. A "priest" with a knotted cord belt chastises the man in the stocks angrily, and the man cowers against the coming assault. An elegantly-dressed young “nobleman” with an embroidered jacket, velvet chaperon and cane, prepares to throw a piece of fruit. The man in the stocks shields himself, as missiles fly towards him, but still manages a smile, even when they narrowly graze past him. The young nobleman is at the front of a crowd of enthusiastic throwers. A tomato hits its grimacing target.

On the lawn, people are country dancing to a violin – we see a few views of the group, and a close-up of the lady providing the music. A bearded man in glasses (perhaps the producer, John Purchese) passes some comment.

Outside view of the apse at the eastern end of All Saints’ Church on Twyford Avenue, where the medieval crowd are watching the bear dance for a man playing the recorder.

A taped notice on the board at the front of the Rex advertises “ALL THIS WEEK YOURSELF ON THE SCREEN!”, with times, as members of the crowd - boys first - arrive at the cinema, now in contemporary clothing. As they enter, a passer-by looks curious and a dog crosses Fairlawn Avenue towards the stacked window of the crockery shop opposite.

Further information: The Rex cinema was originally called the East Finchley Picturedrome when it opened in 1912, became The Coliseum in 1924, the Rex in 1937 and The Phoenix in 1975. The Phoenix remains a vibrant local arthouse cinema to this day, and is perhaps the oldest purpose-built continuously-serving cinema in the UK.

On becoming the Rex, the cinema had undergone substantial reconstruction to meet modern standards and the challenge posed by the emergence of large cinema circuits (Associated British Cinemas, the Gaumont-British Picture Corporation and Odeon). Three new super-cinemas had opened in North Finchley and Muswell Hill in the preceding couple of years, each designed to the highest contemporary level. Despite considerable modernisation, the Rex was far smaller than the super-cinemas and could not match their facilities or gain access to many of the newest films. Family-oriented programming and a local community role were therefore important in maintaining a sufficient audience for its survival as a business; especially as surging wartime demand tailed away in the early 1950s and the circuits further consolidated under J. Arthur Rank, who took over the Gaumont and Odeon chains. The Rex also sought to provide more varied fare during this period, including occasional foreign-language and X-certificate films which were not widely available elsewhere.

This film would seem to be made specifically for the Rex, both as an advert for the All Saints' fair, and to encourage local audiences to come to the cinema – a local film for local people, something that the major circuits could not provide. Early newsreels of events were often made for local display with similar considerations in mind – though only a small invited group would see themselves on screen on this occasion. This film is not a film of the fair itself, but a preview of the attractions it would contain.

Another film was made by the same production company, Pentagon, advertising the All Saint’s Fair the following year – “Thurs June 25 Sat June 27”. This second film was narrated by the bearded man with the glasses (John Purchese?), who talks about “Let’s Go to the Fair” and shows the reel for the previous film. It does not attempt to recreate the entire fair in advance. Instead, it shows the same family group, in contemporary dress, heading to the fair; gives directions; and has a comic one-man preview of the pram race, with accompanying music. It then returns to the narrator, who asks the audience to pick up a leaflet on the way out. He says that he has taken up enough of the audience's time, and invites the chief projectionist at the Rex, Cedric Hoare (shown in the final shot) to play the newsreel.

“The Phoenix Cinema: A Century of Film in East Finchley” by Gerry Turvey (Kindle Edition) - an exceptionally thorough and well-researched account not just of the Phoenix Cinema and its predecessors, but the whole local cinema business scene in which they operated.