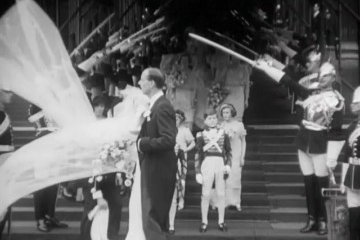 Description: “The normally drab and colourless city of London became gay for an afternoon,” begins this newsreel from 1936, which kicks off with a society wedding at St Paul’s. Later items including military inspections, Shakespeare’s birthday, Hollywood fashion and rugby and football finals, all discussed with a droll, self-deprecating commentary. This newsreel would be shown around the world, so reflects the way London wanted people to regard it in 1936.

The bulk of the film features the FA Cup final between Arsenal and Sheffield United.

Gaumont cameras were banned, so after some fine shots of the crowds in London and arriving at the stadium, they take to the air and film the game from an airplane above the stadium, all the while giving a cheeky running commentary. This makes an interesting aside to an eclectic newsreel.