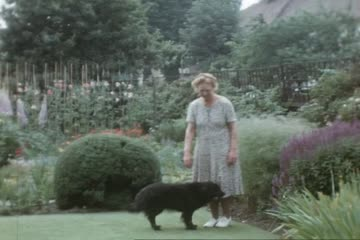 Summary: A film which exhibits a number of gardens in and around Wandsworth, followed by a school sports event and village fete.

Description: The film opens with a number of short shots, which detail a variety of gardens in and around Wandsworth. Some of the proud residents pose next to their well-kept flowerbeds. We see a family enjoying tea, a lady and her dog standing among the shrubs and a small dachshund barking at the camera man as it’s owner walks up a small footpath. Children run home from school in their uniforms and pose for the cameraman.

Pampas grass blows gently in a garden while near by residents and a large red truck pass by. We then see more gardens, one with a detailed rockery and another with an impressive brick archway.

A large construction truck approaches and we cut to what appears to be a school field or local park where residents are walking their dogs.

A man in a white coat stands in front of a bright red door and admires his garden. He is joined by a young boy as they stroll through the gardens. A group of three elderly people approach the camera and the gentleman at the back laughs and waves to the camera.

A shot of a building site details the early construction of a large block of flats. We see more construction work talking place and are shown a street of small three storey flats. These differ from the traditional houses that have been shown throughout the film. Four man are shown carrying a large black object on the building site.

We then cut to a pond in a small local park. Residents dressed for winter feed the ducks on the water.

The gardens of a large house. A small band play brass instruments while topless men stand in between each musician. Speakers are set up in the gardens and a group dance. People walk around the grounds and a lady tends to a baby in a carriage.

We see more gardens, some of which are filled with roses. A gentleman in a beige jacket walks proudly through his garden and we see a postman delivering letters to one of the houses. A train passes in the background.

Cut to a country show where young boys are scrambling to the top of a fence to get a better view. A horse laden with flowers is inspected by a judge and large crowds wander around the fair. A number of horses are seen parading in front of a large white tent.

Short shots detail a junction with cars approaching, a weather vane on a rooftop and a man riding a bicycle.

Cut to a local sports day. The officials and judges are preparing for a full day of prize giving. The crowd is treated to a boxing match, a high jump competition and large group gymnastics exercises. A man entertains the crowd as he rides a penny farthing. There is group dancing and young children are taking party in a fancy dress competition. There is a wide range of costumes and the crowd cheers them on as the judges decide on a winner.

Girls pose in their gymnastics wear before entertaining the crowd by vaulting over a vaulting box. Two assistants help each gymnast as they flip, vault and leap frog over the wooden horse.

We cut to a more sedate scene as a group of older women play golf while the young girls perform wheelbarrow races and serve cakes at a fete. A blackboard advertises the ‘World Premiere – Film of the Last Years Fete’. The fete is well attended and crowds mingle and enjoy the refreshments.

People hold up large discs with animals drawn in. These include Lion, Maiden, Bull and Crab. A large group of younger girls in varying coloured dresses pose for the camera.