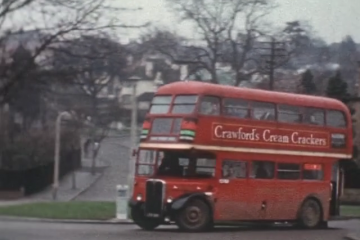 Description: Opening shot shows the Southgate coat of arms with motto ('Ex Glande Quercus') and the words 'Southgate Newsreel'. Music plays and the film is narrated by George Fletcher. The first section: an intertitle reads 'Lord Mayor at Oakwood'. It is a rainy day, men are digging and a large number of women walk across boards set out across a muddy field. A marching band led by a goat goes past. The occasion is the laying of the foundation stone for the new Southgate County Grammar School. A large crowd is assembled under and around a large marquee. A very large black/dark red car (a Bentley?) with the numberplate MX1 pulls up in the mud, a policeman standing by. Two elderly men exit the car. Many other local and county dignitaries then exit other cars. An alderman wears a large tricorne hat and carries a large ceremonial mace. The Mayor of Southgate, Ruth Winston, is amongst them - she wears a red cape, livery chain and black tricorne hat. Also present are the Lord Leftenant of the County of Middlesex, who wears military uniform and a pith helmet with plumes. The guest of honour is the Lord Mayor of London, Sir Harold Gillett. The chairman of the Middlesex County Council is also present. The military band plays as the rain still pours and the dignitaries take their seats. The school chaplain dedicates the stone, which is then set by the Lord Mayor of London. The crowd in the rain wears yellow raincoats and carries umbrellas. The mayor makes a speech.

Next, an intertitle reads 'Diesel Railcars for Palmers Green'. Music continues to play as a red London bus drives down a high street followed by a black cab. The bus carries adverts for BP and Crawford's Cream Crackers. The narrator tells us that this is a rail replacement service in Wades Hill as it goes round a suburban roundabout. Another bus pulls up outside a rail station with an advert for Heinz Baked Beans on the side. The bus is a shuttle service between Palmers Green and Hertford North stations. A man in a brown overcoat and a cap seems to direct the passengers. Sections of the old railway are being replaced to accommodate the new and faster Diesel trains. A sign for Palmers Green and Southgate is shown (above a smaller sign that reads 'Passengers cross the line by the footbridge only'). A shot inside Palmers Green station shows one of the new Diesel trains pulling up, then a shot from the front of the train and inside the driver's cabin, followed by a shot through the window. The narrator tells us the new trains are faster, more comfortable and cleaner. The train stops in Hertford North and the windows are cleaned. More shots of the interior of the train, which seems very spacious. The train goes through a tunnel and we see close-ups of the driver's controls. We return to Palmers Green station (indicated by a sign). An advertising hoarding for train excursions is seen, with prices for trains to Colchester, Ipswich and Cardiff. A child (wearing a coat, it seems to be winter) on the platform points as the train pulls out the station.

Next intertitle: 'A Hundred Years'. It is now summer, and we see a large number of children in Grovelands Park in the sunshine. They are all in fancy dress in milkmaid-type dresses with Regency-style bonnets; the boys wear frilly shirts and cravats. The adults are dressed more typically of the late 1950's, the women in floral sleeveless dresses and the men in short-sleeved shirts. These are the celebrations for St. Paul's School in Winchmore Hill, celebrating its centenary (1859-1959). The children line up as the mayor and mayoress arrive to present prizes (the mayor now is William Victor Pearce, he wears a suit with a livery chain; his wife wears a blue dress suit). A girl carries flowers and presents them to the mayor; other girls in frilly dresses sit in the sun. Adults stand behind with bunting in the background. A man in suit introduces the mayor, who gives a speech. Now the children dance in formation, a sort of line-dancing.

Next intertitle: 'Scented Garden for the Blind'. The mayor and his wife walk into a public garden on a summer's day (they seem to be wearing the same clothes as in the previous section). A large number of blind people, mostly with sunglasses and white canes, are seated. The garden is specifically designed for the blind so that flowers can be located and identified by their smell. The mayor gives a speech, then leads a blind man around the garden. A rail around the garden has brail markings to help the blind people identify the flowers. The blind people sit down to have tea and cakes. Last shot is of a cane on the grass.

Next intertitle: 'Southgate Horticultural Society Show Fete Gymkhana'. A large fete in Broomfield Park has tents and a carousel, and a miniature car ride for children. This is the 15th Annual Pony Show and Gymkhana. A small girl in smart equestrian gear and riding helmet sits atop a pony. The Floral Queen, 18-year-old Miss Janice Oakley, walks onto a stage holding a bouquet; she wears a smart white dress with white pumps and is flanked by two girls in blue dresses, who wear white flowers in their hair. Spectators sit in deck chairs. The mayoress, in an A-line floral blue dress, presents the Floral Queen with a tiara. The three girls are then driven around in the back of an open-top white car. We now see horses with riders jumping obstacles. Mrs Bedwell presents the cup for best pony of the show, to Miss Haycock with Red Devil. The more serious part of the competition on the jumping course now starts. We see the horses with riders jumping over various obstacles with the crowd in deck chairs still watching. One horse is ridden by a man in military uniform. Next, a dog show and children with dogs, followed by the children's talent competition: a child tap dances. Next: the fancy-dress ride. Costumes include a phantom horse and rider (man dressed as a skeleton); pearly king; belly dancer; Wind in the Willows; and Little Miss Muffet (a small girl on a pony with a big fake spider). The film ends with the Southgate coat of arms and THE END with Southgate Tube station in the background. The final title reads 'Southgate Newsreel is a Planet Film Society Production', with a high street in the background.