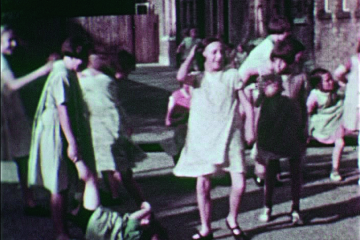 Summary: A mixture of black and white and colour film showing the girls of Miss Sharman's Children's Home, an orphanage for girls in Newlands Park, Penge. From the variation in weather it seems the film was made over more than one day. Towards the end of the film there is some text encouraging the audience to donate money to the children which gives the impression that the film was made in order to raise funds.

Opening scene of large Victorian terraced houses, to the side we see a smaller building which looks like a school and is presumably the home .Outside this building we see a number of younger children playing ball, or carrying a teddy bear or a doll. Children talking with others over a gate, probably outside the premises either in Venner Road or Newlands Park.

Various scenes of young girls performing a number of domestic jobs such as scrubbing the steps leading inside the Home, washing cloths,pegging them onto a washing line,washing crockery,watering plants in a border using a small watering can.

A young girl prepares a table, putting a tablecloth on and adding dishes and cutlery. Several children sit at the table and are waited on by the young girl. It looks rather like  pretend food!

Other scenes of the children at play,playing with building bricks,drawing,and a line of young girls bounce and catch balls outside the home,they have their own play mats and are playing in a very orderly fashion.

A young girl washes up very studiously even if there is no water!

A line of young girls pose outside the home, pose for the camera and bounce and catch balls outside the Home.

Intertitle: 'Time Marches on' Learning to be useful appears.

A line of children run and jump, one after the other, while some children watch, others sweep, shake doormats and use brush and pan.

Group of children, reading, writing, and perhaps, sewing. Scenes of children playing with hoops,prams,dolls and teddies, and have a race with the prams!

Older girls cleaning exterior windows and another polishes the door knob, and then lead the large group of girls in a race across the yard.

A group of girls are interacting, holding hands, then perhaps playing  head, shoulders, knees and toes or a game where they copy each other

Four Girls taking part in a dance routine, perhaps a May dance?, they join a much larger group for an impromptu tug of war game! A few girls give a demonstration of shoes being cleaned and polished.

Scenes of Girls playing piggyback, leap frog and skipping, and trying to organize themselves for a group picture!

Intertitle: This is Mary collecting on behalf of the children.

We see a girl in a green dress with a white collar standing against a wall, smiling.

Intertitle: Wont you help by adding to the collection on Leaving? Thank you.

(24: 23) The film returns to black and white. Three girls wearing coats (suggesting a different season) are in the yard picking flowers from the bushes near the house wall. People can be seen walking down the road over the boundary wall and a boy looks to be about to climb over the wall.

They run around and then a group are gathered around a large watering can one carries a camera.

Further information: Miss Sharman's Home moved from Southwark to no. 9-31 Newlands Park (just behind Penge East Station) in 1930. It was situated at the junction with Venner Road (00.14 shows the building and roads). The film depicts exterior views of the buildings, with children learning and playing. There are no interior views. All the children are girls aged between approximately 5 and 15 years and appear happy. There is a mixture of black and white and colour film.

According to Kelly's Street Directories, Miss D.J. Hacking was honorary superintendent in 1937 when this film was made. Mrs Dorris Ferris, a resident of the home 1947-1952 has informed Bromley Archives that Miss D.J. Hacking was still in charge at the time she was in the home. Mrs Ferris was in St John's house, which was one of four houses. Each house had about 27 girls in it and was looked after by a matron and a cook. The four houses were converted terraced houses - each one of Miss Sharman's houses was originally two terraced houses. A large room on the ground floor was created as the play room. There was a large yard at the back on the site of what was originally the gardens of the eight terraced houses.