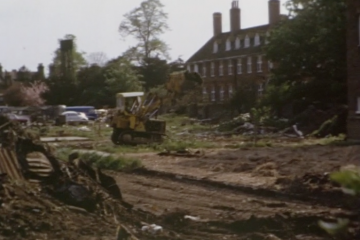 Summary: A film showing the work completed in the first month of the county court extension in Bromley

Description: A backgarden, slightly overgrown, a washing line crosses the garden, we catch a glimpse of a small mechanical digger at the back of the garden, as the camera pans around to show a small garden shed and buildings in the background. Close up of the cab of the blue digger, which is very close to the garden. At the back of the garden there is a large field and we can see a yellow digger is clearing some ground, digging trenches. The blue digger clears a large area and a housing estate borders the area.

The area is by the side of a main road and we catch a glimpse of cars and a bus. We see a building site with site offices and a distinguished man with a black hat is holding plans looking at the camera.

Scenes of the building site as work develops, wooden foundations are being laid, and the concrete lorry arrives to pour into the foundation.

A workman appears to be helping a local women resident dressed in pink caot and brwon hat-he hands her a basket.

Two men in suits survey the scene holding medium size posts. The site and structure appear to be developing with a metal frame erected. Views of the fields and site we see a Drive with caution sign on a wooden fence.

Close up views of the trenches and cleared areas at different stages of the build, and the impact ob the surrounding area. A fence has been cleared and we side the full view of the side of an official looking building.

A large crane positions a steel structure on the site and is viewed through a tree clearing. The structures are carefully put into place and men can be seen around the structure, the crane has Cox Plant on the side of it's red arm.

A woman walks back from the back of the garden she is dressed in a white top and blue trousers and she has been watching the red crane in action.

From an upstairs window we see an ariel view of the red crane in action moving a large steel structure on a very sunny day, it appears to be a tower being assembled and we can see men helping to attach and erect the tower, we can now see that it is a very large crane being assembled and a blue sign states 'C J Sims'.

In a very dramatic shot we can see the arm of the crane being attached two men appear precariously perched as they attach the crane arm and than walk along it.

More views of the building site with concrete posts in position, and trenches dug. The construction site is deserted and a woman wearing glasses and a blue apron is walking around the site inspecting the work!

A numbers of concrete posts appear to be in position and the site is becoming cluttered with building bricks and building material.