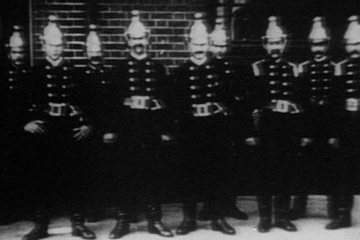 Summary: Copy of a 1911 film about the Croydon Fire Service. The first intertitle introduces a 1911 display of a fire engine.

Description: The screen displays the title "Fire Brigade Display Croydon 1911 Clarendon". Two rows of well turned out firemen in uniform stand to attention. A fireman speaks to a smartly dressed man in a bowler hat. The smartly dressed man and the fireman walk across a stone courtyard. A wooden structure - the size of a large wardrobe - is ablaze. A fireman runs in with a fire extinguisher and puts out the fire. Another wooden structure is brought in and set alight. Three firemen run in with three buckets and a hose. The third bucket is a kind of pump which feeds the hose,. One of the firemen pours the other two buckets of water into the third bucket as it uses up the water. The fire is still going as the third man runs off for more water.

A sheet is lain on the ground, four men lie on the sheet as if passed out. Four firemen then come in and arrange the bodies into safe positions in order to be lifted up. Once the firemen have got them up they put them over their shoulders into a 'fireman's lift' and run off.

A man jumps from a large wooden structure with a window-like hole at the top, on the ground there is a large group of fireman presumably holding a safety net. A second man jumps from the window of the structure. Now out in front of the fire station a man is carried across the yard by his hands and feet, he is then lain on the ground. There is a crowd of young boys watching dressed in firemen's hats and uniforms. One of the firemen waves a cloth in the face of the man on the ground, a man and a woman stare at the screen with a third person with protective gear on.

We see the words: "From Duty to Earnest. A Fire Call!". Doors open to the fire station and a horse drawn fire engine storms out. The adjacent set of doors open, a crowd can be seen gathering next to it and a man cycles past on his bicycle. A second horse drawn carriage rides out. The carriage speeds down the street. A large crowd watches as a man climbs down a ladder with someone over his shoulders. We see the large wooden structure from earlier propped up against the building. From the top of the structure a water hose is blasting. A fire man on the ground sprays a large hose on the street as a crowd behind him moves past. Back at the fire station there is an even larger crowd and two fireman spray another water hose. Now there is an empty street with rays of sunshine bursting through the trees, the light gets brighter and then the screen goes black.

Further information: In 2012, this film was used in a DVD documentary about the history of the fire service. The DVD documentary, produced by Factory Television, was a free inclusion in a magazine for a partworks series centred around diecast model fire engines. (Film London holds a copy of the documentary, FL/FPC/232).