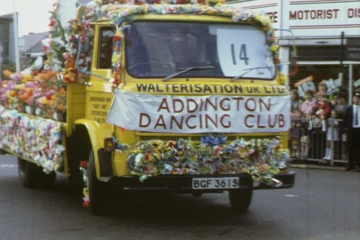 Description: In the opening shots we see cars driving by (the shot is blurry) and flowers in a park. We then see a large fountain behind Fairfield Halls, in Fairfield Gardens. A decorative flowerbed reads '1883 - Croydon - 1983 - charter - centenery' with the coat of arms of the borough above. Various close-up shots of flowers follow.

Next we cut to a street scene on North End, near Tamworth Road, Station Road and Poplar Walk. In the background we see the Railway Bell pub. A mounted policeman on a horse rides past as a marching band of Sea Cadets goes past behind him. A large float drives behind them with 'Croydon Carnival Queen' written on the front, decorated with balloons. The back of the float reads 'Croydon Arnhem Link' and the Carnival Queen sits in a white dress at the back, surrounded by balloons. Another huge lorry follows, its back trailer displaying a huge model battleship marked with the number 089, with the letters RN (Royal Navy) on the back of the truck. A clown rides past on a high unicycle, followed by a float for 'Radio Mayday - 1972-1983'. There is a huge model of a record player on top with men dressed as doctors holding a giant syringe. A sign reads 'we inject the music'; there is a large toy lion on top of a hospital bed. Next, a large group of Morris dancers follow, then a group of women folk dancers and a man with an accordion. The next float is for 'Old Town Youth' followed by a float for National Westminster Bank. Next, some men wheel a hospital bed along with a nurse sat on it. Another marching band then follows and we see the Motorist Discount Centre behind on a corner, opposite the Railway Bell pub. A large yellow truck follows with a banner for Addington Dancing Club, decorated with a huge number of colourful flowers. Next, a yellow tractor pulls a float carrying a model of Croydon Clocktower and a windmill, with 'Croydon - Arnhem' written along the side (Croydon is twinned with the city of Arnhem in the Netherlands). A sign for Station Road can be seen in the background as the truck turns the corner. The next float is for 'Barclays in Croydon 1883-1983'. Another marching band goes past the Motorist Discount Centre, followed by children in fancy dress. We see a 64 London bus in the background. A float for 'Croydon Round Table' (the Rotary Club) carries a huge model of a darts board. Another marching band led by a woman goes past, followed by a small float with a boy in a canoe on the back. An adult woman dressed as a Girl Scout pushes a pram and wears glasses with googly eyes. A Girls Brigade marching band is next, followed by a large truck with a banner for 'The Girls Brigade', on top of which sit several young girls in colourful dresses. The next float we see has adults dressed as the characters from Alice in Wonderland on a float for Midlands Bank. A group of children follows, holding a sign for 'Woodcraft Folk'; next, a large model boat with boys in Navy uniform for the Sea Cadets. A McDonalds float is next, with employees dressed up. A shop front that reads 'Robert Fielding' (a hair salon) can be seen behind them.

The next shot we see is the exterior of Beano's Bargain Music Store, clearly closed, with a 'To Let - Estate Surveyor Croydon' sign on the front. Graffiti on the side of the store reads 'Have moved to Surrey Street' with an arrow (the store eventually closed in 2006). Next shot is of a painted sign for One Bell Hill (just around the corner from Surrey Street). Next we see the back of a building in an alleyway, scaffholding on the right, 1960's-style windows to the left, with an Art-Deco-style building squeezed in between, looking somewhat derelict. This is possibly the back of the Grants of Croydon department store. Grants of Croydon is a listed building built in 1894, originally a high end entertainment complex which went into decline after the Second World War, closing in 1985 and remaining empty until its restoration and re-opening in 2000-2002. Next, we see another shot of the back of the complex: a large brown building with ventilation shafts and fire escapes. To the left, in the foreground, is the curved corner of a 1930's Art Deco building. Next, we see the elaborate late Victorian facade of the store, in a state of severe disrepair and clearly abandoned. The windows are filthy, the brick-work, cornices and window-trims are damaged, and the shop-fronts at ground-level are unoccupied. A more modern purple sign for Grants is stuck to the building's front, much at odds with the Victorian architecture; a banner reads 'SALE'. We then see various close-up shots of the beautiful Victorian stained-glass windows, which read Dressing, Gowns, Outfitting Show Rooms (the store originally sold uniforms for the Royal Air Force as well as luxury suits). More close-ups show the stone cornices above the windows, which read Millinery, Ribbons, London House, Lace Gloves, Silk, Dresses, Mantles, Linen.

Next we cut to a night sign with a raging fire, and siren lights in the foreground. We see from the dark outline that a large building with a pointed roof is on fire (possibly an abandoned factory or warehouse). Following shots appear to be of the morning after, as men climb over the brick ruins.

A hand-painted intertitle reads 'Fire at Christ Church, 30 Dec 1985, Burnt Out.' The original church was built in Gothic style in 1851, and eventually closed in 1978, receiving listed status in 1983. After the fire in 1985, the church was mostly rebuilt, preserving those parts which survived. Dramatic shots through the trees show smoke billowing out of the roof, and fire fighters break down the door with an axe, and attempt to fight the fire from cranes. Tiles fall from the steep Victorian roof as the flames burst through. As more tiles slide off, a larger hole appears in the church roof. We see a 'Keep Clear' sign at the door, and then cut to a burning car (a Ford Cortina or Granada), which firefighters extinguish after struggling to life up the hood. Back at the church, the top of a door frame reads 'infants'. Pigeons cluster at a small window on the church roof as smoke continues to billow out and we see firemen's helmets through the church windows.