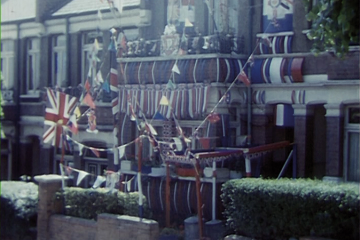 Summary: A film of coronation celebrations in Wembley.

Description: The film begins at Wembley Parish Church on 2 June 1953 at a coronation service. The Mayor, Mayoress, and other dignitaries and well-dressed people are filmed arriving and leaving through the churchyard. It carries on at Wembley Town Hall on Forty Lane, on the afternoon of coronation Sunday for a special service of thanksgiving. Inside the Town Hall, various people are seated before a stage area bearing an altar and Union flag, above the stage there is a large crown and an image of Queen Elizabeth II. A vicar leads the thanksgiving service. The film then moves on to record some local street parties organised by residents across the borough. The Mayor is filmed visiting a street party, and streets and principal buildings across the borough are shown decorated for the Coronation, including the Town Hall and Copland School on Cecil Avenue. There was a competition for the best decorated buildings, and the victors are shown: the houses winner at 3 Lindsay Drive, Kenton; the shops winners of the joint first prize of Bontime Ltd. (watchmakers and jewellers) at 432 Kingsbury Road and Mac Fisheries (a fishmongers) at 511 High Road. Some of the other runners up are also shown: Harts shoe store, Cliffords Auctioneers, Norman Stanley (a television and radio retailer), Wembley Flower Service, and Aileen Paterson (a hairdressers). Souvenirs of the coronation are presented to the children of Wembley and some children are filmed with commemorative books and mugs. Other local commemorations include the 'Coronation seats', special teak seats provided in each ward of the borough, in parks and beside streets. Miss Glenys Archer is elected Miss Wembley 1953 and is filmed with runners up and crowds of well-wishers. The film continues with some of the entertainments and dances in the Assembly Hall during Coronation Week. Programmes are shown for the Grand Symphony Concert and Grand Orchestral Concert and there are views of the Hall and orchestra, including some from above stage. Parts of a choral performance of Edward German and Basil Hood's comic opera 'Merrie England' are also shown. Coronation Day itself brings 'Beacon Bonfires' and a fireworks Displays. A 'Pageant of Youth' and street procession in Kingsbury features decorated cars and carnival floats. Sudbury Court Open Space Coronation Fete features a fancy dress competition as well as sporting events and games. Several of the Borough's sports associations hold coronation competitions including swimming and diving at Wembley Open Air Baths, bowls at Wembley Bowling Club, a cricket match, and a men's cycling race through the borough. There is also film of golf and tennis at the Bowhome Club. The film concludes with elderly residents of Wembley's Eventide Home, Priory Close who quietly celebrating the coronation. An end title proclaims 'God save the Queen'.