All On A Winter's Day 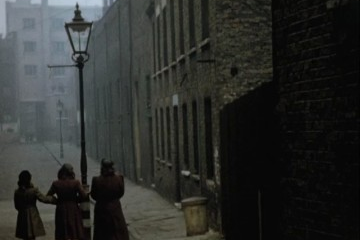 Summary: A film made by the St Marylebone Society about the built environment within the old London Borough Of Marylebone.

Description: Made as urban planning and attempts to deal with the bomb damage of the Second World War threatened to change the character of London, the film pays special attention to the city's Georgian remnants. It includes film of Regents Park (including St John's Lodge and buildings of Bedford College), and the surrounding area: bridges over the Regents Canal, Cumberland Terrace, Clarence Terrace and Clarence Terrace Mews. Mothers and their children move through the park, watching swans and ducks frolicking on a partly frozen lake. There are also views of Portman Square dusted with a light covering of snow. A look about St Marylebone Parish Church and its churchyard reveal scaffolding about its steeple and the detailing on its statues. In the churchyard the camera pauses to capture the memorial to Rev. Charles Wesley, and the grave of Claude Champion de Crespigny. Scaffolding is also captured positioned over the facades of some of the area's Georgian terraces, while a trip inside some of the buildings reveals the bomb damaged domestic interiors. There is a close up of a plaque about Charles Dickens on the outside wall of the novelist's former house at 1 Devonshire Terrace (now 15-17 Marylebone Road). Nearby the filmmakers record the exterior of Marylebone Central National Schools, shooting a close up of the word 'National', which seems to have been painted over to obscure. There are children in the playground outside the school. Next the film moves down along a set of streets: Devonshire Place Mews, Dunstable Mews, Grotto Passage, and Paradise Street, pausing to capture the shop of W.F. Doyle, Chimney Cleanser at number 5 with a sweepers brush projecting as a sign from the wall. More shops follow, on Marylebone High Street and the surrounding area. The early social housing project of Octavia Hill, St Christopher's Buildings on St Christopher's Place are shown with views of the rear of terraces, and the balconied access to the flats. On the corner of Stratford Place and Oxford Street, the camera pauses to capture a plaque (unreadable in the film but possibly for Martin Van Buren, a former U.S. President who lived on the street). Then on to Lettsom House, the building of the Medical Society of London on Chandos Street. Some views shot from a high building of a snowy Portland Place looking North towards Regents Park lead on to shots of the Junction of Weymouth Street and Portland Place, with John Tweed's statue of Sir George Stuart White in the centre of the road. Shots over the rooftops of Marylebone (apparently filmed from the roof of Langhams Hotel), pan left to right over Portland Place, the BBC's Broadcasting House, All Soul's Church and the bombed out interior space of Queen's Hall. A look down Upper Regent Street captures All Soul's Church, and Yarner's Coffee House before turning to capture the exterior of Broadcasting House decked with coloured cloth on its upper balconies and flying union flags, decorated with rosettes. There follows views of the bombed out interior of the building of Queen's Hall, with only the facade remaining. While workmen start to take down the facade, the filmmakers capture the classical columns, and busts of composers (including Handel, Brahms, Mendelssohn, Gluck) that are about to go. There are also opportunistic posters for concerts on the Royal Albert Hall plastered on the side of the walls. Moving across to Fitzrovia, there is The Newman Arms public house on Rathbone Street and the view down Newman passage to its side. Then on to more shops and views of narrow streets and the rear of partly bombed properties, which are still in use. Several shops appear briefly: Dr Scholl's Foot Comfort Service, Etam, knitbak, Warde's Hollywood Shoes, the National Provincial Bank, Ramon, Barratts. Over to the West again, where a plaque indicates the site of Tyburn gallows, and triangle in the road marks the exact spot where they were raised. Another view across rooftops, peers through a smoke haze rising from chimneys, before panning down to show a couple walking down a terrace street of houses. There are details of rooftops and walls (possibly Mortimer Street). An exterior shot of 'The Studio', some terraced buildings housing the London Sketch Club (possibly on Marylebone Road). The narrow row of terraced housing forming Cato Street, precedes views of the Marylebone Theatre on Church Street and St Matthew's Church. Moving North again the filmmakers travel to Lord's Cricket ground and capture The Tavern Public House (now the site of the Tavern Stand), the Pavilion, the Old Father Time Weather Vane (atop a building where the Media Centre now resides) and general views of the ground. At St John's Wood churchyard, on Wellington Place they film various graves including the memorial to Alice Drakoules - pioneer worker for animal welfare and Joanna Southcott the religious prophet. The contrasting face of the area appears in shots of newly constructed flats on Wellington Road Housing, the St Marylebone almshouses, at 80 St. John's Wood Terrace, the new social housing on the Barrow Hill Estate, and the Hospital of St John and St Elizabeth, at 60 Grove End Rd. More of the area is revealed through views of Elm Tree Road, the Constance Spry Flower School, Melina Place, The original St John's Wood Dairy, the St. John's Wood Art Club and The Knight's of St Johns Tavern. A different type of information is revealed by a line of poster advertising including sheets for Haig whiskey, Booth's Dry Gin, Cinderella at the Palladium, a government poster about managing electricity use, OXO cubes, Bourjois ladies fashion, an RAF recruitment poster, Lemon Hart Rum, and Government road safety posters aimed at children. There are also fly posters for concerts at Wigmore Hall and Queen Mary Hall. The film concludes with a retreat to Georgian details - the street furniture lamp posts, and post boxes of Cumberland Terrace and the exterior of Coty House.

Further information: The St Marylebone Society are Marylebone's oldest amenity society. They were formed in 1948 in order to help save the war-damaged Nash Terraces in Regent's Park seen in this film. In 1952 the year this film was produced, the Society initiated a campaign to mark the bicentenary of Nash's birth and helped to finance the erection of the Nash Memorial outside All Soul's Church in Langham Place. Queen's Hall which is seen in the film prior to its final demolition was the site of the first public film show in Britain (on 14 January 1896) when filmmakers Birt Acres and Arthur Melbourne-Cooper presented to the Royal Photographic Society.