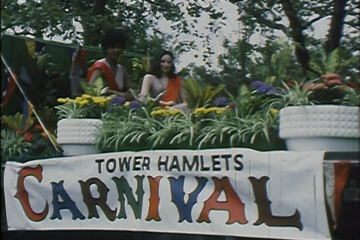 Summary: Amateur film of the Tower Hamlets Carnival in 1979.

Description: This film record of the event follows some of the participants in the carnival parade. The parade includes children and adults and reflects the mixed ethnic nature of the borough, although most of those involved are white. Amongst those caught on film are a multi-racial group of Majorettes, the RS marching youth band, the Dockland Settlement Isle of Dogs Drum and Trumpets Corps, the Expedient Brass Band, a horse and wagon from Truman's Brewery, a police brass band, Morris men, Pearly Kings and Queens, carnival floats from a local scouting group, the Docklands Settlement Isle of Dogs Junior Club, the Royal National Lifeboat Institution, the Seager Place play group, the Bethnal Green Institute, the BGSC, the Unity Club, and George Green Sports Club, as well as beauty queens from the Isle of Dogs and Romford, Miss Dover, and the Queen of the Elderly being chauffeured in a convertible car. The film begins within Victoria Park as the members of the procession prepare to begin. The parade moves through the park, going past The Royal public house (subsequently known as the Royal Inn on the Park), marching along Weatherell Road before turning into Grove Road at the junction with Gore Road. To the south of the park, the parade crosses the Hertford Union Canal before proceeding west along Roman Road, going past the fire station and St John on Bethnal Green church. At the crossroads the procession continues underneath the railway bridge and along Bethnal Green Road. The filmmaker catches up with the parade again later, with views from the bottom of Cambridge Heath Road of the parade passing east along Mile End Road, past the top end of Sidney Street. Some shots look back west along Mile End Road and include some of the taller buildings of the City of London in the background (including the newly constructed Natwest Tower that would open the following year). The parade and film ends in another green space with people shedding bits of uniform and costume to enjoy food and drink whiel relaxing on the grass.