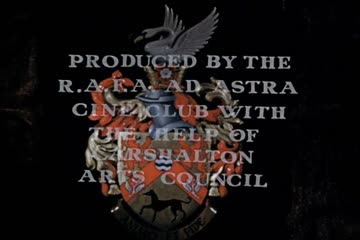 Summary: A film on the 1952 Carshalton Carnival presented by the Carnival committee.

Description: The film begins with a preliminary section recording the Carshalton carnival queen beauty competition at Carshalton Public Hall, Carshalton High Street on Monday 7th April at 8pm. The judges of the competition: Lord & Lady Crook, Helen Temple and Major Wells sit on a raised theatre stage and watch competitors come out, one by one, to be asked questions by a compere. There are occasional views of an appreciative audience. All the young women line up while the judges confer, and the winner is announced as Miss Patricia Sandford. She is adorned with a carnival queen banner and the runners up receive accolades. On Carnival Day itself (June 7th 1952) the carnival procession begins at Rosehill, walking up Reigate Avenue and turning about the roundabout before proceeding south down Rose Hill. The procession is led by flag bearers and features a military cadet band, and several decorated floats. Floats - Carshalton Road Safety Princess, The Westmead Showboat (with passengers blacked up as minstrels), Carshalton & Banstead Young Conservatives, the Carnival Queen, Surrey Fire Brigade, Batey's brewery, Carshalton Neighbourhoods Association, the British Legion, Vee Bees School of Dancing, Park Area Neighbour's Association, Culver's Sports, the Liberal Association, Rosehill Community Association, the RNLI. The procession passes Wrythe Green and travels onto Carshalton Ponds, with crowds lining the route. The procession continues on to the High Street, while the crowds begin to head to Carshalton Park. The procession itself comes to an end at the opening ceremony of the carnival in Carshalton Park, with the carnival queen taking her throne, Lord Crook of Carshalton makes the opening speech, followed by Bedford Wells, the chairman of the Carnival Committee. The minstrels of the Westmead Showboat sing to the audience and the crowds begin to ride on the fun fair and take part in the amusements and games stalls. In the arena the Royal Air Force police perform a dog display with Alsatian dogs, followed by R.A.F.A. cadets competing for the 'Battle of Britain' cup with a performance of synchronised marching on parade. A gymnastics display by the Caterham depot Brigade of Guards continues the military themed entertainments. The Carnival Queen and the Carshalton Road Safety Princess wave to the crowds from the 'royal box'. The film ends with people enjoying the fair, flitting between candy floss stall, merry go round and carousel.