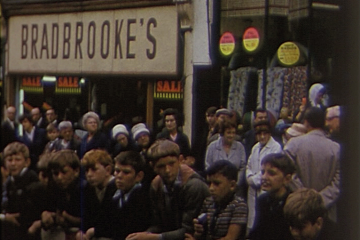 Summary: Amateur film of Erith before and after redevelopment.

Description: The film begins in 1966 with views looking down on Erith from Bexleyheath. It continues with a roam around Erith streets taking in Cross Street, with its terrace housing, the Rose & Crown public house, Coldharbour Place, some light industrial units, The King's Head public house, views looking out on the River Thames, the printing works of Mansfield and Wadlow, Headley Mitchells department store, the High Street and Pier Road. There is hardly any traffic and the whole town seems practically deserted suggesting this part of the film was shot early on a Sunday. There follows a travelling shot filmed from the front of a car driving down Erith streets through residential and shopping areas, including many of the places seen in the previous section. Back as a pedestrian the filmmaker captures the crowds gathering to watch the demolition of the Headley Mitchells department store. The local Mayor and other worthies give speeches from a raised platform, before the Deputy Mayor, Councillor Mrs M Barron cuts a rope, allowing a weight to swing into one of the store's picture windows marking the commencement of the town centre's destruction. There is another quick jaunt around Erith taking in places due for demolition including Leiston Cottages, some other 19th century buildings and the L.B. Stevens butchers shop. The Butchers is filmed closing up for last time, the master butcher comes out of the front door of his shop, removes his apron and tips his straw hat to the camera in goodbye. The filmmaker returns later to record some demolished and part-demolished buildings with an earthmover gathering rubble and placing it in truck and wooden waste being burned. The final scenes feature the Mayor and the Head of the Council visiting the new concrete town centre development and giving speeches, while men continue to demolish the building opposite. The Head of the Council opens a plaque commemorating the opening of Town Square on the 18th May 1973.

Further information: It is not certain that this is by H.C. Burr, but it is the same period and stock as his other films.