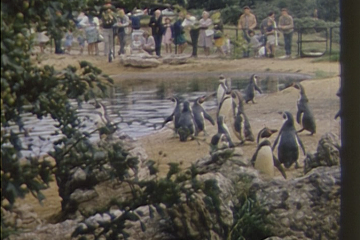 Description: A home movie recording a visit to the zoo by the filmmaker and his wife. It begins with views of the Whipsnade White Lion, the chalk lion carved into the hillside on the Dunstable Downs, before shots of the entrance gates to zoo and the photographer's wife paying at the ticket office. Just beyond the gates there is a sweet stall and a souvenir shop. The remainder of the film records many of the animals held at the zoo. A low fence keeps in an Indian elephant calf and a young goat, many people lean over the fence to pet the calf. Nearby there are adult elephants. A zoo 'train' pulled by a Land Rover transports visitors around the park. In different enclosures they see peacocks, a brown bear, and a Leopard. A group of black-footed penguin waddle in and out of a concrete pond. A prairie marmoset peers out of hole in the ground while nibbling on food. Some Wapiti deer roam an enclosure in the woods approaching the fence to be fed by people. Two polar bears are held in another small area, with one of them showing some distress. A Kodiak bear stands on its rear legs and climbs about its concrete enclosure. A tiger is fed with a hunk of red meat. A lion and lionesses roam about in their enclosure. More enclosures hold Ankole cattle, pelicans, pygmy hippopotamus in a pool of water, reindeer, a parrot, European Bison, American Bison, Patagonian capy, emus, flamingos, some rhinoceroses, chicken, black swans, and gnu (wildebeest). A puma prowls in its cage. The film ends with the photographer's wife leaving by the gates they entered through.

In galleries: It's Your Story!