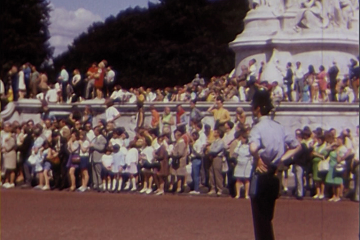 Summary: An amateur film of some of London's famous sites.

Description: The film begins with views from a train going into Cannon Street station, and more from a train leaving looking towards Tower Bridge. There follow views across the River Thames looking towards Hays Wharf. St Paul's Cathedral is filmed from several directions with scaffolding all about its dome. A Christmas tree stands between the columns at the Cathedral entrance. Christmas lights along Oxford Street at night. The advertising lights of Piccadilly Circus, including those for Coca Cola, Guinness, Cinzano, Lamb's Navy Rum, Skol lager, Air India, Wrigley's chewing gum, and a poster for the film '2001 a Space Odyssey'. There are daytime shots of the Houses of Parliament, New Scotland Yard, the Imperial War Museum (in summer and in winter time snow), Lambeth Palace, Marble Arch (with views of the Odeon cinema and fountains), the Science Museum, and the Natural History Museum. Many people visit a fair in Battersea park and the Chelsea Flower show at the Royal Hospital, which includes a stand for European Conservation Year. A number of boating events in the canals at Little Venice during the 'Little Venice Boat Show & Festival 1970'. A brief shot of Ashby Windmill at Blenheim Gardens in Brixton. Back in central London, there is film of Buckingham Palace and of Horse Guards Parade during the trooping of the colour. Film of Trafalgar Square including Nelson's column and fountains is followed by more of Parliament Square. At Admiralty Arch a policeman stops a black man and marches him off up Whitehall (unclear what has occurred). They pass some protesters with placards reading 'Recognize Biafra', and 'Renounce Wilson's War - Biafra' around Downing Street. Shot outside No. 10 Downing Street record tourists having their photographs taken.

Further information: Title on spool is Looking at London; title on box is London No. 6, Into the 70s.