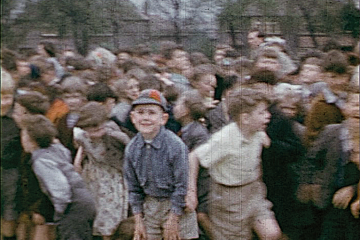 Description: The opening title to this film states 'This Film Show is being presented by The Bexley, Erith & Crayford Road Safety Committee'. It begins with shots of the local railway, with a train passing and views around Erith Station, including the station platform, trains arriving and leaving, and the points' room (with levers being pulled). Next there are views of local streets, including the road junction at the corner of High Street and Avenue Road with a building of the 'Royal Arsenal Co-operative Society' on one corner and the Odeon Cinema on another. The passing traffic around Erith High Street includes a horse drawn delivery vehicle, private automobiles, a Routemaster bus (numbered 480), trolleybuses (numbered 696 and 698) cyclists, handcarts, a motorcyclist, women pushing prams, and children walking with their mother. Many shops and building are visible including Mitchells Stores and the Ritz Cinema (which is showing 'Five Fingers', a 1952 film starring James Mason). At some factory gates (possibly Vickers Sons & Maxim's Erith Works on Fraser Road), there are people leaving and going to a nearby trolleybus stop. A policeman in a school assembly hall holds aloft a sign reading 'Brakes Tested To-Day - To-Morrow is too late'. Later inside a classroom he talks to children about road safety. Outside the school children practice crossing the road safely. At a factories bike shed, a policeman tests the safety of a woman's bicycle, checking the chain, brakes and bell. At a busy road crossing in the centre of town, motor vehicles, pedestrians and cyclist are shown to all be vying for space (some buses pass including the 89, 126, 160, and the 241 for Sidcup). There follows some rather incongruent views of a dog show held at the Bexleyheath and Welling Football Club ground on Park View Road in Welling. Some of the busy urban roads of central London around Hyde Park Corner preface shots of the exterior of RosPA House (at 17 Knightsbridge Green). A group of women are filmed entering, passing a sign outside reading 'Exhibition Now Open'. There is a quick view of Knightsbridge Green from inside building upper window, with Hyde Park beyond. There are also some dark views inside the exhibition show of the displays and models. After the exhibition, attendees are seen boarding their coach home (the coach is marked 'Curries Coaches Stone, Dartford'). Back in Bexley the film continues with views of the exterior of the Regal Cinema on Bexleyheath Broadway, where a group of schoolgirls are queuing to enter (films advertised include 'Home At Seven', 'Today' and 'Broderick Crawford in Remember That Face'). Some further street scenes around Bexleyheath, now with snow piled up on the edge of the road, with busy road traffic in town and the clock tower visible. Some quiet tree lined country lanes are contrasted with a busy trunk road. A colour sequence follows with schoolchildren walking from school into playground with teachers on to a playing filed marked out in a road pattern with a zebra crossing. The children sit watching a road safety demonstration by police officers with real cars, bicycles and motorcycles and a series of staged accidents. The film concludes with shots of a busy road in a suburban area of new housing with prominent red signs marked 'Accident Area' and 'Caution' on the side of the street. At a busy road junction in town, some of the stores in the background can be made out including Grays, K.E. Carter & Co. House Agents, Barclays Bank and A.B. Hemming.