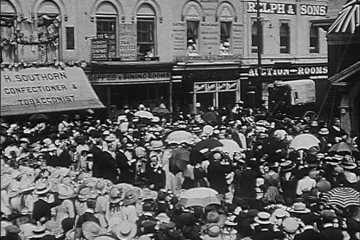 Summary: To celebrate the ascension to the throne of King George V, Bexley Urban District Council commissioned Walter Maxted Epps to design a clock tower for Bexleyheath town centre. Local dignitaries and townspeople gathered on the 17th of July 1912 to witness the official inauguration.

Description: The film begins with group of men marching along a road, with uniformed and helmeted firemen in the lead, followed by men in top hats and boaters. The road is cobbled and has tram tracks set in it. In the background can be seen shops including W&R Fletcher 'Colonial Meat Importers'. Some other traffic uses the road including a horse drawn carriage, a woman pushing a pram and a group of women pedestrians. At the base of the clock tower a large public meeting is seen taking place with men and women watching a male speaker on a raised platform, everyone is smartly dressed with hats and parasols in abundance. The speaker unlocks the doors of the tower and the crowd celebrates with a raising of their hats and parasols. Amongst the crowd a man conducts a choir of women and a group of firemen stand upon a horse drawn wagon (their fire engine?). In the background, some shops are visible including H. Southorn Confectioner & Tobacconist, A.Watling, A. Miller and one signed Relph & Sons Auction Rooms. Many of the buildings are adorned with bunting and the Union flag. The film ends with a shot of the clock tower's upper part (the time appears to be 1.05pm) and the Union flag suspended from it. The clock tower includes a bust of King George V, which is seen in the film.

A FULL DAY OF PLEASURE

"In the long list of galas held at Bexleyheath, there have been few, if any, that have achieved the success registered on Wednesday. The weather, that very potent factor in these events, was in a most gracious mood. The heat was tempered by a cool breeze, which was most gratifying after the sweltering rays of the sun experienced for several days previously, and the comfort of the thousands who attended was added to in consequence. Before the day tickets had been sold for over 5,000 people, and with those who paid at the gate for admission, there were from 7,000 to 8,000 people in the beautiful Danson Park, so kindly placed at the disposal of the Committee once again by Mrs. Bean. As usual , a programme that was as varied as it was entertaining had been arranged, and even though there was no poultry show on this occasion, there still was more than sufficient to amuse all. Details as to the preliminary proceedings at the Market Place will be found elsewhere in this issue, but it should be stated that after the ceremony in connection with the Clock Tower a procession was formed, with Mr. J. Reed as Marshal, consisting of members of the Army Service Corps, Dartford Prize Band, school children, Boy Scouts, Bexleyheath Fire Brigade, Boys’ Brigade, Boys’ Band, and the boys of East London Industrial School."

Fitting Memorial of the Coronation

"There are those who to-day feel proud when they gaze upon the clock tower in the Bexleyheath Market Place that will serve as a reminder for all time of the Coronation of His Most Gracious Majesty King George V. It is a fitting memorial of a great event, and it is the consummation of much labour, labour that has for the most part been unobtrusive, and certainly not made lighter by the resistance, passive and otherwise, of some, who for no apparent reason, have been pleased to look on the project with something less than favour. It is not to them that the residents have to give thanks for the first attempt to give Bexleyheath something in the way of architectural adornment, but if they obtain pleasure or profit, direct or indirect, from the undertaking no one will be better pleased, we are sure than those who have given their time to forward the project.

On Wednesday, the tower was formally inaugurated, the door opened officially, the four dials of the clocks unveiled, and, thanks to the kindness of the Gala Committee, the foundation laid of the fund that is to provide the mechanism for chimes attached to the clock. Work on the Tower was commenced on November 20th last, and it has been completed for some time, the cost being some £590, of which £40 has still to be provided. The foundation stone was laid on January 8th, the historical records being placed underneath. The design of the tower was entrusted, after open competition, to Mr. Walter M. Epps, A.R.I.B.A., and is in freely treated Renaissance style. The base measures 13 feet each way, the height from the ground to the centre of the clock face is 31 feet, and from the ground to the top of the weather vane 46 feet. The clock is electrically controlled, and is guaranteed to be correct to 30 seconds. The four dials are each 3ft. 4in. in diameter, and will be lighted at night time. The base of the tower is used by the electrical department as a transformer station, thus doing away with those unsightly erections which for so long have disfigured the Market Place. During the past few days the appearance of the space surrounding the tower has been further improved by certain alterations, towards the cost of which the County Council has contributed.

There are many to whom thanks should be accorded for the part they have taken in the work, but a few deserve special mention. Foremost amongst them are Mr G. Sheldon, J.P., the Chairman of the Committee, Mr E. J. Reid, whose help has been most valuable. Messrs. W. T. Smith, H. G. Ticehurst, and W. T. Howse, the members of the Building sub-Committee, Mr. Epps (the Architect), Mr. T. G. Baynes and his indefatigable assistant, Mr. P. E. Bex, and the other members of the Executive Committee."