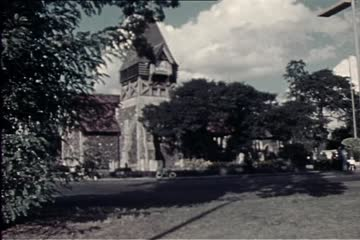 Summary: Film explaining how the Borough is modernising its old housing.

Description: An intertitle stating London Borough of Hounslow followed by a shot of a church with traffic passing by. A voice over commentary states that more homes in the UK are modernised and that the borough is responsible for more than 17000 properties. We see a shot of a housing estate with a title 'Your Home'. Various exterior shots of a 1950/60's house, cut to a man with a power tool removing bricks form a fire place. There are shots of a man plastering a wall and then a man painting a window frame. We see exterior shots of houses, one with a man cleaning a car. Next are shots of an old-fashioned kitchen and then an outside toilet. The commentary says that many old houses are being restored to bring up to modern standards. More shots of the exterior of houses, several show a fire escape to the first floor and an untidy back yard. Next we see two men with clipboards, from the Housing Department, looking up and assessing a house. There are shots of a water tap, a rotting window frame and building work in progress. As a temporary measure, whist a house is being renovated, we see a man and woman enter a caravan and look at the oven and cupboards.

There is a sign stating London Borough of Hounslow-Mordernisation, followed by a shot of a cramped old-fashioned bathroom. The next shot is of a modern spacious bathroom and then a view of the back of a house, with an extension. There is a view out of the window from the kitchen. A cupboard door is opened to show a boiler and pipework and then a view of a radiator and room thermostat. We see a man decorating a room and then a shot of a hallway also being decorated. Next, we see a man laying bricks and building a wall, with a shot of a concrete mixer pouring cement and a man laying a concrete floor. The next shot is a man pulling electric cables under floorboards, fitting a power socket and re-fitting floorboards. We see a man preparing to hang wall paper and then a man fitting glass to a window with putty.

A shot of a residential street with a close up of oil stains, from parked cars, on the kerb. A view of parked cars in a street pans round to a new construction of garages. We see parked cars in new off-street parking followed by people walking along new pavements and seating benches. There are children playing on a roundabout, a swing and playing with toys in a play area As an example, in Deeplish at Rochdale Lancashire, we see two boys cycle along a newly-built parking area in an old residential street. The last shots are of the re-furbished street with film credits over.