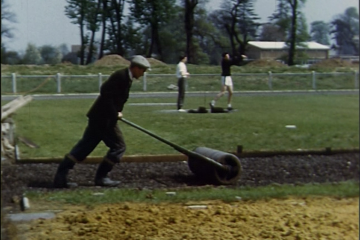 Summary: A record of activity in the urban district of Hayes and Harlington in 1956.

Description: The film begins florally with a quick look at daffodils growing in a park and tulip beds in the town's traffic islands. Next there appear views of the erection of the grandstand at the Park Farm Stadium in Hayes. In the first shots the basic metal girder structure stands in place overlooking the running track, ready for the next stage of construction. Builders raise more metal into the stand and make preparations for the pouring of footings. Meanwhile a grounds man rolls a flat area of earth while a few young athletes use the space for running and javelin practice. Rosedale College visible in the background. Some later shots show the grandstand progressing with brick walls, a roof and some seating now in place. Film of the Hayes Annual Summer Fete begins with a fancy dress competition, adults addressed as a witch and Charlie Chaplin review children in a range of outfits, and notably some dressed as a priest, a Chinese woman, a robot, and a chef. Nearby a float for Fremlins County Ale features a model farm with oast houses. The fete procession is filmed moving along wet streets. Many of the participants wear raincoats while the street side crowds hold umbrellas aloft. Floats and vehicles pass by for the Carnival Queen, McDougall's Flour, Fremlins brewery, Fairey aircraft manufacturers, Smiths potato crisps of Brentford, the Borough of Uxbridge heralds, Walls ice cream, Castrol oil, Ramsgate tourism, A&D Price cleaning services, R.E.M.S. refrigeration equipment, and the Uxbridge Post. Action then switches to the fete, which is similarly afflicted by rain. The fete features fair rides from Pettigroves merry-go-round and a miniature steam railway, 'to The Kiss of Death' and 'The Largest Rat' freak shows. Tables about the ground are the home for a stall from the 1st Hayes End Scout Group, a darts came, and Hales fruit and vegetable stall. A display of show jumping forms the only live entertainment recorded. Despite the rain, attendance is high and everyone seems to be enjoying themselves. Another floral interlude captures bush roses in bloom in a park's rose beds before some views of recently completed flats on the Barnhill Estate. The complex of three-storey apartment blocks stands in manicured communal gardens. There are some closer views of particular blocks including Ayles Court, Phillips Court, Sutherland Court, and Attlee Court (on Attlee Road). A happy young couple enter Attlee Court as new residents.