A Good Name... The Story of One Neighbourhood 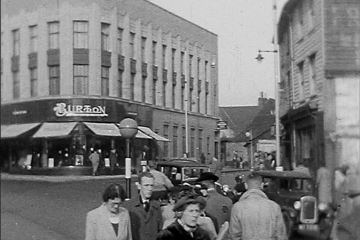 Summary: A film portrait of Hornchurch.

Description: The film begins at St Andrew's parish church (the 'Horn Church') with views from its tower of the town of Hornchurch and on towards Romford, Braintree, and the expanse of Essex. Views of the River Thames include working boats and riverside industry around Rainham Creek. The large historic houses of the area are shown next: Elm's Manor, Bretton Farm, Upminster Hall (now a golf club) and Cranham Hall. At Cranham Hall a man is filmed scything and raking. The area's ecclesiastical buildings are also discussed, with Cranham Church and the nearby farmhouses, North Ockendon Church, Rainham Church and St Andrew's Church again. A walk along the river Ingrebourne, goes through meadows and on to the footpath to Corbets Tey, along by Upminster windmill and Warley Woods. Then the past is left behind for a look at the present day elements of modern life in the neighbourhood announced by road traffic, cars and double-decker buses. Ardleigh Green is seen across the Southend Arterial Road before a survey of housing taking in Hornchurch suburbs, Art deco flats and Edwardian houses. Upminster shopping centre appears with its stores including Burtons menswear. The modern local employer is represented by Lacrinoid Products, with scenes of light industry, employers at their plastics plant, women and men work on production lines in a factory producing plastic items including buttons. At the end of the day workers leave the factory gate on Stafford Avenue on foot and by bike. The railway is shown, with a steam train and an electric train travelling into London, and shots of commuters returning home at Upminster tube station. Polling day for the Council elections is shown at a polling station in Emerson Park Ward. Great Langton council are shown in session in the Council chamber with the investiture of the new Chairman of the Council, and the passing on of chain of office. At home, a man is filmed reading 'Hornchurch & Upminster News' which has a front page story about a rates rise. The rates demand arrives by post and the man examines them. The next section of the film covers the work of the Local Authority. A dustman is filmed collecting a bin and emptying it in the dustcart. Gravel pits are filmed being filled with waste. Some of the waste is seen being sorted for salvage, including paper baled for resale. Some Council vehicles are shown being serviced. The disposal and processing of sewage is followed by the maintaining of roads and verges. Street sweeping is shown, performed by a man and vehicular road sweeper. Then the more pleasant council expenses of its libraries, sports facilities and parks and the emergency services of Fire brigade and ambulances. The film then turns to the immediate future of the neighbourhood, as draughtsman are filmed planning the new Hornchurch and the Dovers Farm Housing estate. There are shots of construction on Christchurch Avenue. Then the Hacton Estate, where prefab houses are constructed to meet needs of homeless families on the council waiting list, and Hacton County Primary School. Recreation facilities are shown with a cricket match, tennis courts and football at Upminster Recreation Ground, the bowling green at Haynes Park. And more football at Harrow Lodge. The grounds and lake at Langton also feature. The film ends with the comment that Hornchurch is a town very old and very new.