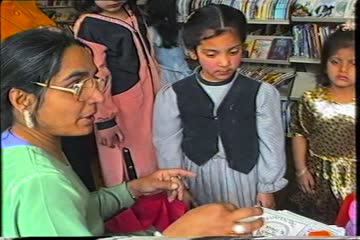 Summary: Filmed in the old Harper Road public library near New Kent Road on 23 April 1990. This amateur film features children explaining the tradition of Ramadam through dance and storytelling and the importance of fasting, charity and giving within the Muslim religion. Organised by the Southwark Muslim Women’s Association.

Description: Opens with children queuing to have their hands painted. The woman doing the painting is asked when she does it and she says at Eid and weddings, any special occasion. She says after Ramadan two days before Eid people have their hands painted with henna and children wear new clothes. The money that the family has saved by not eating that day is given to charity for the poor. It is to make children realize what it is like to starve in this world.

Sound is almost lost at 8’30” when a librarian is introducing everyone to the event, which is run by the Southwark Muslim Woman’s Association.

She says it’s a jack of all trades providing advice, playschemes, pensioners’ club, etc. She introduces a girl who sings a song. A group of children sing nursery rhymes. The woman from the WMA explains that before prayer Muslims have to purify themselves and the children will show us how. The children do this to Hear We Go Round the Mulberry Bush, showing the routine of ablution. The girls perform their own play to explain why Muslims fast. One girl offers another girl some food but she refuses as she’s fasting. She explains that she wakes before dawn to eat and breaks her fast after 6pm. The length of her fast depends on the moon. At the end of the fast there will be a celebration. She fasts to make her God-fearing, God-conscious and to appreciate food. She invites her friend to come round to see if they can see the moon. The friend comes round and the moon has appeared. Two boys do a dance, followed by three girls doing a dance around some bowls. The celebration ends with everyone dancing around. A girl reads from a book.

Please note the published film is an edited version which shows the first 28 minutes. The final part of the film is available to view upon request.