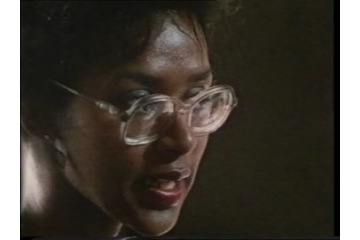 Summary: Video about the experience of being Black and living in Southwark in 1984 and suggestions as to how the council can provide better services for Black and ethnic groups in the borough. Narrated by Trevor McDonald.

Description: The film opens with the intertitle ‘Several of the black groups and individuals invited to appear in this programme declined the offer’. The screen scrolls up to say, ‘Generally their reasons were: - It won’t change anything – it’s not our problem’. Southwark has a black population of 40, 000, nearly 20% of its total population. In the narration, Trevor McDonald says black people in Southwark will argue that they are victims of racism. They will point out that ethnic minorities are concentrated in Peckham and East Dulwich, other areas such as Bermondsey and Rotherhithe and Dulwich Village remain almost exclusively white. These are well-established close-knit communities, while the centre of the borough is not and this is where black people are allocated housing. The film interviews people from the borough who express their views about whether Southwark is racist. McDonald says racism is felt to exist but how it is perpetuated is much more difficult to identify. In an effort to alleviate the problems Southwark has set up a Race Equality Committee and a Race Unit. Graham Geddes from the council says that generally black people have less service from the housing department. Getting a job is harder and unemployment is over 20%. A young Asian man says lower qualified people will get the job over “coloured” people. It’s at school that black and white people really get together for the first time. Teachers believe that this is where racism begins. Diana Kennedy, acting Headteacher at Brunswick Park Junior and Infants School says the school won’t tolerate it but out of school there is a lot of racism. The LEA thought it so serious that it had to be looked at in every part of school life from textbooks to playtime. According to Diana Kennedy occasionally there are brushes but nothing to do with a racial issue, but a way of getting rid of frustration and that’s when words get used. We have got rid of the books and the texts that are racist and we pick up on any points in any books. A teacher at Brunswick says they also try to stress similarities between races too so that they everyone has respect for the different ethnicities. In many London schools there are no black teachers so anti-racist teaching carried out mainly by white teachers. Trevor McDonald says if racism is to be changed attitudes must be changed dramatically. Black people say they get the worse jobs. Southwark’s mayor during 1983/84 Sam King says the unemployed are bitter and there are strong feelings of constant rejection by a white system. But it is possible to succeed as demonstrated by the Capital News Agency, run by two black women. They operate as journalists and don’t see colour as a barrier but as a gift. They offer a different voice from Fleet Street, but they say it is no good just being different; they have to be good too. But most black people accuse the council of discrimination says Trevor McDonald. Sid Hercules, Southwark Council for Community Relations says there is a long way to go and Southwark’s Unemployment and Housing policies will have to be looked at. Graham

Geddes says most people within local government don’t see themselves as racist and don’t believe the institution is racist but the council’s equal opportunities and employment policies show a lack of development. Trevor McDonald says no council can achieve miracles alone but grievances grow. Southwark controls nearly 70% of all properties in the borough so it’s in a unique position to influence where people live. Nearly 1/3 of its properties are classified as hard to let and these are concentrated in Peckham and East Dulwich. North Peckham Estate has 1010 flats and 30% of the tenants are black. The council controls housing allocations and many black people feel that there is a council policy of putting members of ethnic groups in unpopular, rundown estates. Tony Ritchie, leader of the council, says there is no deliberate policy but there is a problem in the council’s allocations policy: it places too much weighting on residential qualification and not enough on housing need. Councillor Aubyn Graham believes there is a deeper problem, black people take bad housing because they know they are not going to be offered anything else. Southwark’s Director of Housing John O’Brien said there 18 – 20,000 properties.; some will be given to “coloured people” but the council has no ethnic records so they have no idea of how many ethnic families are on any particular estate. Aubyn Graham says evidence is there to see you don’t need figures. The Commission for Racial Equality on Housing in Hackney came to the conclusion that the ethnic population gets put in the worse housing and its conclusions been accepted for all London boroughs. Southwark officials deny overt racism but discrimination can exist. Black people feel that British people will not accept them not just for their colour but for their culture too: white people are unsettled by ethnic minorities’ reluctance to abandon their languages, customs and traditions. According to Trevor McDonalds the strongest and most resilient group are the Asian community who for them the retention of culture is vital. One young Asian woman says, “We don’t look English and if we try to be English we will be rejected by both, that’s why we want to learn about our culture and to share our culture. If we don’t learn about ourselves we are going to be left in the middle and won’t know who to turn to.” McDonald says most Afro-Caribbean traditions are close to British ones but the community feels rejected by society and has formed black-only groups. They need money and premises. A group called Unity looks to the council to provide both but has no funding at this stage. Membership puts demands on them and they need commitment from the council. The proliferation of similar groups set up help specific problems of all the ethnic communities is testament to the alienation they all feel. Southwark has a network of these organizations and they function as a second level of social services. Some have funding from the GLC or Southwark: nearly all of them are run by volunteers and run on a shoestring. Their aims are to provide the services black people need but don’t seem to get. One group is the Southwark Muslim Women’s Association which meets in a former school. The council’s services have not grown to meet the needs of this community so the MWA had to do something, but resources are limited and it is disappointed by the lack of awareness to identify the community’s needs and develop the resources needed. The head of Southwark’s Race Equality Committee says we should give ethnic minorities equal share of facilities and we’re trying to redress that imbalance. The Committee has given grants and appointed race equality advisors in the housing, employment and social services departments to advise department heads on the best ways to satisfy the needs of ethnic minorities. It will take us a long time to achieve but made good start. Graham Geddes says the problem is finding ways of addressing the more insidious forms of racism which result in the way services are distributed. Trevor McDonald sums up by saying some people feel that Southwark is wasting its time. But there are others in community who believe you have to start somewhere and this is a step in the right direction.