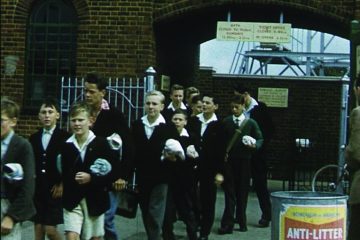 Summary: Footage of sports and gardening.

Description: A compilation film of outdoor activities by the pupils of Belmont Boys School. On the school playing field, the boys compete at shot put, javelin, long jump, high jump, and perform increasingly difficult gymnastic leaps and rolls using a gym horse and mats. A mass cycle ride of boys from the school following teachers on motorcycles takes them to a parkland area and a competitive event. A number of contemporary cars (Ford Popular, Ford Consul, Morris Minor and 3-wheeled car) pass through school gates. At the event the boys run in various track events, including relay races, sprints and long distance competition. It is a hot day and the boys take some welcome cool refreshments. In the school grounds the boys engage in artistic activities, drawing plants in a flower garden. Subsequently they perform more active tasks in the garden - hoeing, forking, pruning, dead heading flowers and barrowing away cuttings and clippings. The school grounds also provide space for more outdoor activity. Some boys play a doubles tennis match on a tarmac court; others practice football skills, or compete in a netball match, a lacrosse game, and a cricket match. There is also music practice outside with a small band of guitarists, drummer, and singers performing for the camera. At a lido some boys dive from high boards and swim in the pool. The film ends with a few schoolteachers practising their golf skills, teeing off on the school green.