The Films of L.T. James (The Bath Films) 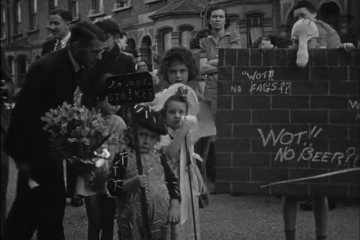 Summary: A compilation of 14 films showing events around Hackney and beyond.

Description: Film 1 (in black and white, c.1950): The film begins with a close-up of a man's hands manipulating a nut and bolt. There follows a shot of a railway line crossing over a river bridge (possibly over the Thames), the area looks like a working docks. A tugboat is filmed moving along the river toward the camera. Film 2 (in black and white, c.1941): This film records summertime civic entertainment events held on a stage set up in front of Hackney Town Hall featuring various performers. The Happitones (two men in evening suits and a smartly dressed woman accompanied by a female piano player) perform an apparently amusing musical skit on June 29th; the Romford Silver Prize Band are billed above the stage on June 30th (?) and perform following a Punch and Judy act that also features a real dog on stage; the Merryland Variety Show (featuring a jazz band, with the initials CS on their music stands) perform on July 9th; The Boosters are billed above the stage on June 30th (?), possibly referring to a group of children who present some pieces of fabric to the audience. There are good views of the audience, which largely consists of young boys and girls with some adults visible further back in the crowd towards Mare Street. A raised tarpaulin provides some shelter for the audience. In one view a man sits in a large motorised three wheeled wheelchair. Film 3 (in colour, c.1954): This film features individual and relay running races run by young men and women at Eton Manor sports ground. These are followed by images of a man and woman tending a domestic garden (this film is double exposed with images of boating, bathing and log rolling on a river making some sequences difficult to view). Film 4 (in colour, c.1955): The Mayor of Hackney awards prizes and trophies to young male and female athletes at Eton Manor sports ground. Shots of people amassed by the River Lea at Springfield Park, which is decorated with bunting. Film 5 (in black and white, c.1941): A group of children in fancy dress are filmed at a street party, sat at tables in the road and standing. The costumes include a boy dressed as the cartoon/graffiti character Chad, his costume nose hanging over a board painted as a brick wall with 'Wot!! No Fags??, Wot!! No Beer?? and Wot!! No Bread??' chalked upon it. Adults and children are also filmed around tables containing food. On a stage a man dressed as a clown interacts with a boy. An audience of infants sits on benches watching. Film 6 (in black and white, c. 1943): A group of children are on a stage raised over Hackney Town Hall steps while a man speaks into a microphone and introduces Hackney Mayor Florence de Vergier. A group of girl dancers called 'The Windsorettes' perform on stage. They are followed by the K Division Military Band and a few unnamed performers, including a Punch and Judy act. A banner reading 'Holidays at Home' is suspended over the stage. The audience consists of children and adults, including a few servicemen. Film 7 (in black and white, c.1943): A line of child performers are on stage in front of Hackney Town Hall while the male mayor speaks into a microphone. A male comedian dressed in white with a bowler hat performs on the stage, followed by young girls dancing, other child acts and an adult group 'AETMS'. An audience of children and adults, including the Mayor and Florence de Vergier, watch. Film 8 (in colour, c.1942): At Eton Manor sports ground, young women perform highland dancing followed by a marching female bagpipe troupe dressed in lace and tartan. A male clown performs with children dressed up and holding costume props. Men play bowls. Children watch a Punch and Judy act. A bun eating competition with boys running to buns suspended from strings and attempting to eat them without using their hands, followed by a group of girls attempting the same feat. Film 9 (in colour): At Eton Manor Sports ground boys, girls, and adults engage in sports and fairground games, including a shy, a bar billiards type game, bowls, an egg and spoon race. Also evident are women dressed in service fatigues and a military band. Film 10 (in black and white, c.1946): Men playing bowls on a neat green with tennis courts behind. A vicar gives a service in front of a World War I memorial. A parade of marching groups in uniform walk through a park and along a shopping street, followed by a church service. Possibly a Remembrance Day event at an unidentified location. Film 11 (in black and white, c.1950): Firemen practise putting out a fire that has been set in a brick tower in the fire station yard; water jet hoses are directed at the flames. Then firemen roll up their hoses and repack them in the fire engines. The firemen then practise using the extensible ladders mounted on other vehicles. Film 12 (in colour): A formal tree planting ceremony with the Mayor (this footage is very dark). Film 13 (in colour, c.1951): The Mayor and Mayoress visit a housing estate to speak to a group of the residents and have a go on the children's playground. A ceremony with the Mayor and other dignitaries inside a building, possibly the formal inauguration of Somerford Grove Branch Library, which features. Film 14 (in black and white): Men working on a building's foundations and shots of a tugboat on a river.

(Please note that currently several films are missing from the viewable clip.)