Kaye compilation including a carnival event at Alexandra Palace, 1979 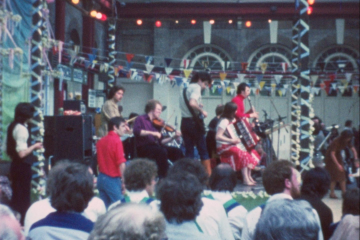 Description: Film begins with a spot of jubilant couple-dancing to a live band - with a reasonably eclectic assortment of traditional instruments - playing in the main halls of Alexandra Palace.

We catch a glimpse of the Radcliffe's Steam Tour Carnival with the tower of a bouncy castle waving behind in the wind.

A couple are chatting over a pigpen following on to a second shot of onlookers visiting the bulls and pigs.

We cut to a view through a rain spotted window of a full rainbow behind semi-detached houses.

We cut back to a roaring bonfire at the "steam tour" while patrons mill around.

The camera scans across to capture the outdoor goings for a moment, before we see inside a tent where a professional snake handler, carefully rests a snake around a young boy's shoulders.

Back outside an Alsatian suddenly leaps through a burning hoop and then subsequently brings down a faux assailant in the carnival field before a track-suited trainer comes to the rescue.

A blue caped, red masked luchador (Mexican wrestler) figure is regaling a modest crowd into a microphone, to announce his next daring feat. He appears to have some trouble in getting the burlap hood over his face. For his next trick, the now blindfolded stunt performer is skidding in circles along the grass, around volunteers standing in the field for the crowd's entertainment.

Two new bands briefly appear on the stage as the festival fireworks are starting to be set up, as the sun begins to go down.

We end with a montage of fireworks including an impressive Catherine Wheel that spins wildly around, swishing and sparking with speedy abandon.