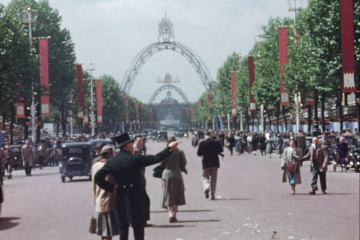 Description: Certificate reads: “This is to certify that this film has been specially commended by Amateur Cine World.” Followed by title cards that read: “Proud Heritage; A tribute to a glorious city.”

Title card reads: “London – early June 1953; “The tumult and the shouting die”1 – the bunting and the flags remain.” Close up of banners emblazed ‘E’ and ‘R’ (Elizabeth Regina). Wooden boards, covered with rags, an ‘emergency exit’ sign lies on the ground along with an empty champagne bottle. Multiple shots of The Mall, banners running along each side of the road, and the ‘Coronation Arches’ – four tubular steel arches suspending metalwork crowns, designed by Eric Bedford for the Coronation of Queen Elizabeth II. One shot shows a metalwork crown in the foreground and the Duke of York Column in the background. Equestrian Statue of Charles I, behind it the corner of the South African High Commission and spire of St Martin-in-the-Fields. Nelson’s Column against a blue sky. Statue of the Duke of Devonshire looks upon the turret of Horse Guards, the building has been decorated for the coronation and crowds gather around a mounted trooper. The cenotaph, surrounded by poppies.

Title card reads: “London pride has been handed down to us.”2 Nelson’s Column; Big Ben; the Edith Cavell Memorial reads, “Humanity.” Winston Churchill gives the famous ‘V for victory’ and steps down from a stage as people applaud. The West Front and Dome of St Paul’s Cathedral. Statue of Queen Anne in St Paul’s Churchyard. Two red busses pass the high walls of the Bank of England; Guildhall; multiple shots of tower bridge and the Tower of London. Monument to the Great Fire of London, the camera pans down to show wooden crates being unloaded from a truck.

Shots of flames against a black background. Title card reads: “Consuming fires have once more swept the City – Great was the havoc wrought by a remorseless foe.” A spire and bombed out building, rubble on concrete. “Never let us forget the brave Suburbs and the terrific ordeal they had to bear.” The remains of a building, now only sections of wall, a staircase, and strewn metal cabinets; a couple walks past unfazed. “Mansion and cottage suffered alike from the pitiless onslaught from the skies.” A redbrick home, three storeys with a tower and spire, pokes out from behind trees and a fence – it is missing windows and whole sections of wall, at the base is a pile of brick and debris. The remains of a much humbler home, with only an Anderson Shelter still standing. At the end of the street is a house with a large Union Jack flag hanging from the window. A shop front with a missing wall, a sign reading,

‘Provisions’ still stands, a woman glances at the sign as she walks past. One house with the roof completely destroyed.

A title card reads: “Man’s inhumanity to man makes countless thousands mourn.”3 A church with one half of its wooden roof missing, sunlight floods in onto the pews. Bibles and hymn books are scattered amongst rubble, one sheet of paper reads: ‘Freewill Offerings.’ The pews are lined with dust and stone. “When the Great Day dawned and War in Europe was ended, the undaunted Suburbs celebrated with enthusiasm.” On Bacnroft road, a young man pushes a three-wheeled milk cart, it’s decorated with a Union Jack flag and matching bunting, painted on in gold letters are the words: ‘Purity, Punctuality, Civility.’ A Small dog follows behind the man. A street with one bombed out house is decorated with more flags and bunting; one flag reads: ‘God save the King.’ Men women and children sit under a sign that reads, ‘We’ve got to Keep on Saving; Buy Savings Certificates.’

A title card reads: “Stratford solved the mystery of the Missing Führer.” A priest emerges from a crowd, followed by men carrying a mock casket – black with the words ‘A. Hitler’ and swastikas drawn on with white chalk, it is decorated with poppy wreaths and white flags. The crowd follows. In front of a pub a little boy with dirty keens and face sits on the ground wearing a Union Jack hat; next to him is a slightly older girl in a purple dress, crouched down wearing the same hat, she smiles to the camera. Written on the side of the pub are the words: ‘No beer.’ Cut to a shot of men laughing around a cart full of barrels.

Multiple shots of a street decorated with signs and flags. One sign reads: ‘Welcome Home Charlie,’ another: ‘Goodbye to all that.’ A hanging basked with red, white and blue roses. Children wave flags as their mothers watch. In front of a busy pub a man in uniform carries two half-pints in one hand. A little girl in a Union Jack dress walks hesitantly towards the camera, her mother holds her up, smiling. “The children enjoyed their street parties, (and so did the parents!)” Multiple shots of children enjoying cakes, scones, biscuits and tea at long decorated tables. Women dance in colourful dresses. A man wearing camo and a ruff plays the banjo to the crowd. Children sit on fences in front of terraced houses.

Title card reads: “From East to West – On V.J. Day, huge crowds gathered in Westminster.” Two soldiers stand on the Statue of Sir Robert Peel in Parliament Square. A young boy in a red blazer spins a noisemaker. People climb the Statue of Edward Smith-Stanley, Big Ben in the background. “People, people everywhere!” Crowds of civilians and soldiers gather in Leicester Square. People sit happily on benches and the water fountain. “Even Shakespeare didn’t mind a visitor.” A pigeon perches on the head of the Statue of William Shakespeare.

Title card reads: “Perhaps our greatest memory – “V-E” Sunday, when the Royal Family drove from St. Paul’s Cathedral.” Huge crowds and flags of the Union Jack and Soviet Union hanging from buildings. “Crowds patiently lined Fleet Street in anticipation; The great moment – here They Come!” Four men on horseback; followed by two beefeaters on white horses; in a carriage are King George VI in uniform and Queen Elizabeth the Queen Mother. Shot of St. Paul’s in the distance. People wave to a car with a cameraman stood on top.

Title card reads: “And today, the Suburbs celebrate a very different event – the accession of a young and beloved Queen.” A band marches down a London street, followed by several parade floats on the back of trucks, there are red busses and taxi cabs in the background. “The Prime Minister is proud to take part in the local celebrations of his own Constituency.” Churchill walks with councilmen, seemingly enjoying the proceedings. “Arise Sir Winston!” He steps onto a small stage as he watches the parade go by. First a marching band, then soldiers – they salute to Churchill and he takes off his hat – followed by drummers from the Navy and WAAFs. Churchill smiles to his wife, Clementine. A sign reads: ‘Long Live the Queen.’

Another shot of the ‘Coronation Arches’ from the start of the film. Shots of grass and worn brick pan up to reveal St. Paul’s Cathedral. “Queen Elizabeth II London salutes you and bequeaths to you its; Proud Heritage.”

2 From the Noël Coward song ‘London Pride’ (1941) written during the Blitz.