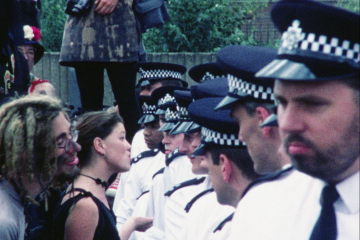 Summary: Amateur film of the Reclaim the Streets protest that took place on M41 motorway, Shepherd's Bush (1996). Using street-parties as political protest, the scene is carnival-like and lively, supporting the pro-environmental motive of anti-cars.

Description: The film documents the “Reclaim the streets” protest of July the 13th, 1996, M41 Motorway, Shepherd's Bush (now the West Cross Route). This was one of 24 protests that took place across the UK, part of the anti-car movement supporting alternative forms of transport, which used street parties as political protest

First shots show the gathering at the starting-point of the protest, at Liverpool Street Station. Hundreds of participants present excitement and anticipation, throwing paper in the air. Throughout the film, we see close-ups of unimpressed policemen, line of officers blocking the road, and a large number of police vans and even a helicopter. There is evidence of some police confrontation with young protesters, as they try to move wood and pipes from roadworks.

Still, the film shows a huge turn out with hundreds of people walking down the M41. The scene looks like a carnival, people in fancy dress and painted faces, mariantoinette dress-float, people playing drums and violins on the grass, heads bobbing and dancing in the streets and on top of cars, throwing ribbons in the air, etc. People smiling and seem to be enjoying themselves.

There are shots of people climbing polls to fasten banners across the motorway, one of which reads, “Reclaim the Streets” in colourful writing. Protesters hold a variety of signs, such as “Temporary Closure for Street Festival”, “Fight Back”, “Give a hoot, take a bus”, or “Cars make me sick”, all of which encapsulate the motive of the protest. Towards the end, we see protesters painting the road with sentences such as “Road Rave”. People walking around grass-areas in bare feet, blowing bubbles, emphasising the freedom and hippy-vibe.

The crowd is mostly young, but still diverse. We see a baby wearing a bandanna dancing on someone’s shoulders, elderly people walking through the crowds, and children playing in a sandpit created on the road. The whole film reflects a strong sense of community but also discontent. With a massive turnout of over 6000 people, this echoes the growing environmental-concern of UK society, united to state opposition towards a car-dominated transport.

Further information: The Reclaim the Streets movement began in 1991. Characterised as a non-violent resistance movement with an anti-road objective, confronting corporate dominance resulting from globalisation and cars as main form of transport. The movement used street parties as a form of political protest, taking-over roads or motorways, and staging a carnival/rave under the premise that occupying roads would opening-up public space. These events were colourful, and included free food, music, and a very lively atmosphere. The first of these protests was held on Camden High Street, on May the 14th, 1995. The M41 Motorway protest was the 5th of 24 which took place in the UK, and one of the largest to occur. The last one in this country was held on the 10th of September 2003, in opposition to arms trade.

The movement extended worldwide, with dozens of street-parties/protests taking place across Europe, Australia, North America, and Africa; from 1997 in Finland, up to 2017 in Australia.

"FOR walking cycling and cheap, or free, public transport, and AGAINST cars, roads and the system that pushes them."