The Big Day and Babs' Bloomers 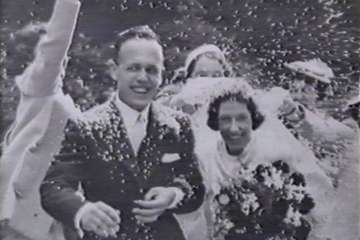 Summary: 1939 meets 1990 as ‘Babs’ reminisces about her wedding day, held on the same day it was announced that Britain would go to war with Germany for a second time.

The footage begins with an inter-title, Christine Collins Production, followed by a photograph of Christine’s parents smiling on their wedding day with friends and family throwing confetti rice. The narrator, Christine explains that “for every woman, her wedding day is a special day” to the sound of Church bells ringing, and goes further to mention that “for my mother, it was an extra special day.”The next inter-title has ‘the big day’ listed in typical 1940’s lettering, followed by photographs of houses, and Christine’s mum, Babs, solo and with friends ending with a picture of Dave, the fiancé lying on a sun chair with Babs explaining how she met Dave, in 1938 on the London Underground.

Babs is being interviewed in 1990, sitting in a typical 1980s stripy grey chair next to a lamp and side table wearing a shirt and skirt. She explains that they met each other’s family and they courted, and as she talks there are photographs of the pair together in the 1930s, for example the two cycling. They decided to schedule the wedding for September 3rd 1939, and the film cuts to the war announcement made by the then Prime Minister Neville Chamberlain at 11:15am on September 3rd, 1939. There are scenes of 10 Downing Street, the houses of Parliament and the cenotaph as Chamberlain’s sombre voice looms over the radio, “...this country is at war with Germany.”

The film returns to Babs’, she explains that she was just putting her wedding dress on when the announcement was made. Babs’ goes onto describe how war had been mentioned prior to this date and that preparations had already been made. Over her narration there are images of ‘air raid precautions’ in the Borough of Edmonton, the digging of trenches and gas masks being issued. Babs’ explains that the family had hoped it was to be good news on that day and not bad. However the family had concerns the night before about the impending war announcement and her mother suggested they go and speak to the vicar who was performing the service. The vicar encouraged them to go ahead.

Babs’ continues to explain that soon after the announcement of war the sirens sounded and she realised that “war was here”, there are photographs of London as the sirens sound. Chaos ensued for Babs’ and Dave’s wedding, the phone wouldn’t stop ringing with guests cancelling because of blocked roads, a bridesmaid cancelled as well, so a relative was pinned into the bridesmaid dress and as Babs’ narrates there is a photo of the impromptu bridesmaid smiling.

Babs' explains that the weather was hot and sunny for September, she mentions that she received a lot of sympathy for marrying on the outbreak of war, all her neighbours came out to wish the pair well; the Dunkirk spirit was already alive. The couple married at Saint Paul’s Parish Church in Winchmore Hill, Enfield and there is a modern day scene of the Church, with organ music playing and the sound of ominous planes, Babs’ narrations supports the scene by explaining that although the service went to plan, the vicar kept looking to the ceiling, expecting a bomb to land, every time a plane flew over they thought it might be a bomber, and told each other to ‘buck up.’

The wedding goes to plan and there is a picture of the bride and groom with their family. The bridesmaids wore blue taffeta, made from curtains because even before the advent of war it was hard to get the correct material. The day was made difficult by the fact that the bride’s new mother-in-law was German. Babs’ felt that the day was rushed because they were thinking about dangers the future held. There is a juxtaposition of the wedding guests dressed for the occasion whilst carrying gas mask boxes.

Babs’ states that after their reception the newlyweds returned to their new flat in Potters Bar. They had to prepare for the nights blackout and there are images of a window with blacked-out curtains. Babs’ explains that in the evening, an air raid warden knocked on the door stating they could still see a glimmer of light, the young newlyweds didn’t realise how serious the war was going to be. The film ends with wedding photos played to 1930s jazz music.

The last extract of the film are outtakes from the interview. The music played is comical as Babs forgets parts of the interview questions and exclaims that she can’t say certain things on camera.