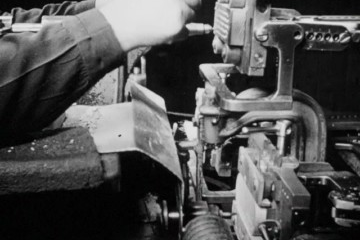 Summary: Brush Making To-Day is a celebratory, fascinating and well crafted film from around the 1950s, documenting in great detail how wooden and plastic brushes are made in a home counties factory, including animations, music and a voiceover.

Description: The film begins with dramatic music as the production company logo scrolls around a fish eye lens view of a room with a camerawoman visible outside the window - perhaps Marie herself.

How ironic then that the opening shot is of a woman, on her knees, scrubbing the floor. The opening title and credits, also including animation by Eric Saw and Tony Willoughby as the narrator, fade in and out over this shot. A montage of different brushes being used introduces the film’s subject matter, including a man brushing his coat, shot from below at an angle, which gives it an almost noir-ish look. The eloquent male voice over begins to tell the story as a well to do woman wearing 1950s knitwear sits at an elegant dressing table and brushes her hair.

We are first taken to a wood of Beech trees in the Chiltern Hills, where the brush making process begins. Beech wood is most favoured for making brush handles because it is hardwearing and strong grained, and this is why Robert Webb first set up his business in the area. Next we are shown how the wood at the wood mill is cut into quarters and then boards. We see many close ups of working men in aprons and flat caps using dangerous looking circular saws with no guards and wearing no protective clothing. The cut boards are arranged in geometric patterns to be air dried in a kiln. It is very important for the wood to be correctly seasoned as it prolongs the life of the brush. After drying the wood is planed and shaped into brush handles, some by a graceful semi automated process which is shown at some length but others are still turned by hand in a traditional way. Then they are tumbled to soften and shine the hard edges. The appearance of the employees is typical of the time, men with slicked down hair, smartly dressed wearing shirts and ties and some with white coats over their clothes. There is a woman on the production line too, also in a white coat.

Next we see a stop frame animation which shows us where the high quality fibres and bristles to make the brushes come from, with arrows pointing to regions all over the world. We then see a man preparing the bristles for a scrubbing brush before he loads them into a sorting machine. The camera pans along to slowly follow the bristles as they move on conveyer belts while the worker watches. As the fibres are trimmed, tied and sliced into smaller bundles by hand using a large guillotine the voiceover adopts a playful but serious tone warning of the dangers to fingers. The fibres are now ready to be attached to the wooden brush backs using a mixture of semi and fully automatic machines.

The drilling and filling machine sequence which follows has, we are told, been slowed down slightly so we’re able to see exactly how this complex process works. The machines, which are designed and built in the factory, are mostly operated by women, and include an ingenious toilet brush maker. The final touches are made to the brushes before they are sent to the warehouse for despatch.

With some more dark moody lighting we watch brushes being packed into boxes to be shipped to the far corners of the Commonwealth and other overseas territories. As the celebratory music from the film’s opening re enters we see a dramatic montage showing the destinations of the boxes as the camera pulls back from each one. We can relax safe in the knowledge that police stations in Lusaka and Nairobi and prisons in Lagos and will be kept clean thanks to brushes Made in England!

But this is not the end of the film, quite. Suddenly we hear the voiceover mention Web designers. We haven’t suddenly jumped forward 50 years to the digital age but instead see a shot of a drawing board being used while we are introduced to company’s newest and most modern innovation, completely plastic brushes. The idea comes to life with another snappy stop frame animation, in which the new plastic brushes are laid out with a musical fanfare, but which sadly can’t illustrate one of their main features – the bright colours. We see more shots from the factory floor with similar machines to those we’ve seen previously and are told about the different materials used. And finally we return to the housewife from the beginning of the film, as she finishes brushing her hair and moves to the kitchen to do some housework. Unfortunately at this point the film’s quality starts to degrade and as she eagerly unpacks and assembles her new plastic broom, and the music starts up, the film comes to a slightly premature end.

Further information: This film was presumably made to celebrate and promote the Great British brush making industry. It’s location is the factory of Webb, Jarrett and Co, Ltd. in Chesham, Buckinghamshire, which in it’s heyday had around 40 employees. This business was first set up by Robert Webb in 1829 and continued to be run by his descendents. It was then modernised during the early to mid 20th century by chief engineer Lawson Broad. The manufacturing processes shown range from hand turned wooden bannister brushes to new fully automated plastic brush making machines, thus capturing a transitional period in the industry.

Brush Making To-Day is expertly shot, edited and recorded with an informative voiceover giving it a professional appearance. There is an interesting mix of shots and some technically sophisticated effects - titles, circular wipes, animations and slow motion sequences - and it contains in depth information, all of which would have required much time spent on pre and post production and research. Every stage of the manufacturing process is meticulously documented with the camera patiently following the action and cutting to frequent close up views to illustrate the details. The voiceover gives clear explanations of all the processes involved but there are also many long pauses which allow us to watch the action and gives the film a relaxed, leisurely pace.

The film was made by Marie Partridge Productions, and Marie is listed in the credits as Photographer, presumably this was very unusual at the time. Marie was a film enthusiast and amateur film maker of the mid 20th century. Amateur Cine World, May 1958, p. 72 has a short biography of her, “emphasising that, as a lone worker, she is the 'first woman' to be awarded a Ten Best accolade, as well as acknowledging her longstanding interest in film-making [beginning in 1934] and her interest in art.” (quote from The Institute of Amateur Cinematographers' Film Collection) She was also active in the Pinner Cine Society. The script was written by Tony Rose, who was another influential figure in amateur movie circles at that time, editing magazine titles such as Amateur Cine World). The sound recording was by John Aldred who actually worked professionally as a sound engineer, sound recordist and dubbing mixer in the film industry from 1937-1986. So this film seems to have been an interesting mix of the amateur and professional working together.