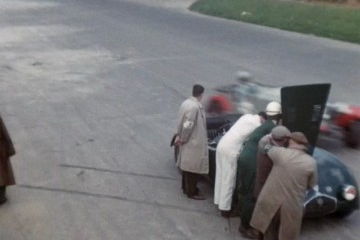 Summary: Filmed by Marie Partridge, of the Pinner Cine Society, this film shows races at Silverstone, Northamptonshire and car trials on a winters day in the Chiltern Hills.

Description: The film opens with a silver ball turning with 'A Marie Partridge Production' on the ball, and the image of the filmmaker reflected in the silver ball. There is an inter-title with a 'Chiltern Car Club' brooch. The next inter-title reads 'Silverstone' with a track pass for 1952. The opening scene is drivers inspecting their cars preparing for the race. One man examines the engine of the 'No 46' racing car and a female racing driver inspects the pedals and instruments around the steering wheel. The competitors begin to line the cars up for racing, and when the race starts all rush over to start their engines. The crowds look on as the cars race past the pitstops. They race round corners and underneath advertisements for the 'Daily Express'.

At the pitstop a technician hastily changes a wheel on a green racing car bearing the number '33', another competitor checks over his car and there are further scenes of the cars hurtling around a corner at fast speeds. Another race begins, and men in mackintosh coats and hats look on. One car, green, with no. 32 painted on its side is stationary at the pitstop, technicians lifting up the hood of the car to look at the engine. There are more scenes of the cars racing round corners, and the chequered flag is waved as the race ends and a man congratulates with a beer.

There is an inter-title 'Trials Chiltern Hills' 1952. This is followed by a very cold winter scene, with a sign 'Scrutineers Bay IN' and 1920s cars pulling up into the bay for inspection. It is cold, with ice and snow on the ground, and people in coats and scarfs. A man in a red scarf inspects a map and other people chat. A white car waits at the start of the race, in a forest and the time trial begins. The car drives along in the cold wintry forest and crashes at one point, with the man and woman competitors trying to push the car along. The car gets stuck again and the scene moves onto a blue car which also gets stuck in the cold, muddy terrain. There are various scenes of the cars being tested on this hard terrain, with a lot them unable to get up hills, and needed to be pushed by onlookers.

The next inter-title reads 'Silverstone' MCC 1953, there are scenes of men and women inspecting their cars before the race, each is numbered and then they are positioned on the track waiting for the signal to begin. There are several advertisements. Crowds look on, as the race begins on what is quite an overcast day. The cars, of all different types, but mainly of the 1920s era race around the track. It appears from the scenes of the crowds and cars that this footage has been filmed on the same day as the first footage of Silverstone at the beginning of this film. A family with small children can be seen watching as the race continues with the cars weaving through hay bales. The cars race around corners and the chequered flag is flown and the race ends. A woman gets ready for a motorcycle race. A union flag is dropped and the motorcycle race begins, the last scene involves the motorcycles racing and an inter-title ends the film 'Chiltern Car Club'.