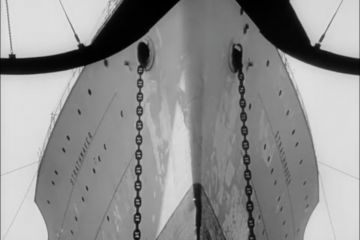 There’s breathtaking footage of the London’s docks at their bustling peak in this informative film celebrating the work of the Port Of London Authority.

Description: Other than the pompous tone of the commentator there’s much to enjoy in Basil Wright’s tremendous film for the Port Of London Authority, which looks at the river’s commercial role in the London machine. The focus is the docks, the workings of which are shown in detail. The scale of the enterprise – the cargo, the huge ships, the vast workforce, the giant warehouses, the powerful machines – is beautifully filmed. It looks immortal, but war was coming and decline was to set in.

The narrator repeatedly emphasises the international scale of the operation, and looks in close detail at several aspects – the import of alcohol, for instance, which is shown being bottled in tunnels beneath the docks. It also features great footage of several lost areas of dockland, and the interiors of spaces such as the ivory warehouse. Almost incidentally, there are also excellent scenes from the Thames itself including things like traffic passing over London Bridge, Teddington Lock and the Prospect of Whitby pub in Wapping.

Further information: Basil Wright was the documentary maker, producer and critic who made “Night Train” and worked with Humphrey Jennings.