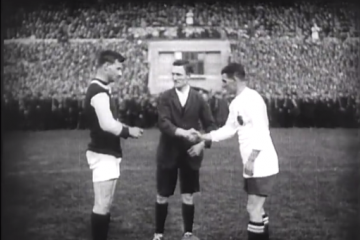 Summary: A wonderful film of The first FA Cup final at Wembley Stadium, know as the 'white horse cup final' between West Ham and Bolton which attracted a gargantuan crowd of 200,000, and captures several extraordinary moments from the day.

Description: Opening Title: This Print is From The National Film Archive Collection

Title: Wembley Stadium which holds 126,000 was stormed by a quarter of a million people.Only the magnificent restraint and good humour of the mingled masses of Northerners and Londoners saved an appalling disaster.

The opening scenes show large numbers spectators climbing the walls of the terrace, from the pitch area.

Title: The Stadium was packed 2 hours before the game began.

Large numbers of spectators can be seen edging closer to the pitch and sitting down on the pitch.

Spectators are now rushing further onto to the pitch watched by policeman and gentlemen wearing bowler hats, and start to invade the pitch in significant numbers.

Wembley is now completely covered with spectators to create a dramatic picture, capturing the huge numbers of people in the stadium.

Title:The King invites the crowd under the Royal Arch.

King George V is in the Royal Box with other dignitaries watching the dramatic events unfold on the field.

Title: A shout of loyal response-but the pressure was too great.

Spectators wave their hats in salute to the King.

Title: How the players took the field.

Both teams now enter the field of play as spectators form a narrow pathway for the players.

Title: At last, mounted men galloped on to the ground.

A line of policemen and some mounted police are driving back the crowds, among the mounted police can be seen the famous 'white horse' of Wembley-named 'billie' ridden by P.C. George Scorey, a man wearing a straw boater hat and large megaphone appeals to the crowd.

Title: The 'Mounties' amid the players.

George Kay the West Ham Captain waits with the match referee, Mr D H Asson in the centre circle and are joined by the Bolton Wanders Captain Joe Smith just as two mounted poilicemen dramatically gallop by them. Remarkably neither the Captains nor the Referee appear to notice and proceed to shake hands and toss the match day coin.

As both sides prepare for kick off we see mounted policemen still on the field of play.

An ariel shot shows the game in progress with all four sides of the pitch ringed with spectators, forming a human touch line.

Bolton's custodian Dick Pym pulls off a wonderful save from under the crossbar and manages to clear the ball despite the close attentions of two West Ham forwards.

Title: Jack scores for Bolton 3 minutes after the start.

David Jack powers towards the West Ham goal pursued by defenders and strikes a wonderful shoot pass the keeper and into the goal from the underside of the bar. Goal! The crowd cheer and wave their hats as the Bolton players celebrate!

West Ham press for an equaliser but the Bolton defence holds firm.

The Bolton players are seen celebrating their second goal scored by Jack Smith in the 53rd minute.

Title:Spectators too tired to stand.

Behind the West Ham goal a group of spectators can be seen resting on the Wembley turf.

Title:The Rush to the Royal Stand

As the game ends and the players leave the field the crowd surges dramatically across the pitch towards the Royal stand.

King George V presents the cup to the Bolton captain Joe Smith, warmly shaking him by the hand and offering him his congratulations, the FA Cup is handed to the King for presentation to the captain, together with winners medals for the Bolton players.

The West Ham team follow and one player nearly forgets his runners up medal much to the amusement of the King, and the smiling embarrassed player! Following the presentations the large crowd wave their hats in appreciation to the royal box.

Further information: The first FA Cup final at Wembley Stadium between West Ham and Bolton attracted a gargantuan crowd of 200,000, twice what the ground could hold. The new stadium was completed in 300 working days, at a cost of £750K, using 25 tons of concrete, 1500 tons of steel, and half a million rivets. Legend has it that a West Ham player was lost in the crowd when Bolton scored their second goal.