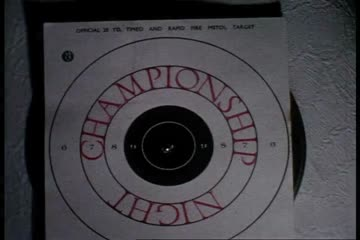 Summary: An amateur film made in a local gun club. An informative voiceover guides us through the inner workings of a firing range, and the participants reveal a variety of mid-sixties fashions. Young and old gather together to engage in a past time that offers a revealing insight into the period.

Description: The credit sequence begins with jaunty music and the films contributors appearing on a spinning record player, the final names to appear are: "produced and directed Reg Gill and Vic Ashlee". Two men wearing suits appear through a doorway, one of them is carrying a rifle inside a leather carrying case. As the voiceover tells us that all guns must be checked, we see a man in overalls unscrewing a rifle casing in a workshop . Two other men take a gun out of a case at a rifle range. The man in overalls cleans and reassembles the rifle. Two ladies wearing brown coats, one with blonde styled hair, appear through the doorway. Cheery music plays as the the men assemble telescopic sights on the range. The man in overalls disassembles, applies oil, then reassembles a Luger.

The voiceover tells us that Tom Ridges is the first to shoot, as a middle-aged man with thinning hair settles into the firing position, and adjusts the leather strap which secures his rifle. We see the target, and shots are fired as Tom alternately checks the telescopic device. The ladies (one of them holding a rifle), and the two men who set up the range are sat watching on a bench with their back to the wall. Tom adjusts his strap and is handed his target results. He then gives them to an adjudicator and seems pleased with the results. Another man identified by the voiceover as Tom Hood adjusts his strap and prepares to fire some shots, he looks through the guns sights. We see the scorer drinking from a cup and the voiceover explains the importance of his job.

A woman with a black eye patch is helped with the leather strap. A man in a t shirt loads a gun. A man in a black jacket also prepares his leather strap. A woman with black framed glasses adjusts her rifle on the range, we then see all three of these people on the range with the spectators in the background. The man in the jacket looks through his sights, the man in the t shirt fires a shot, the woman fires a shot, we see the audience watching in anticipation. the lady with blonde hair and a man in glasses watch pensively. The man in the t shirt seems pleased with his aim, the lady with glasses reloads.

A lady adjusts a moveable barrier, while the voiceover explains that the barrier defines the distance at which pistols must be fired and holds ammunition. A man places a shelf on the barrier. The man in the t shirt places a telescopic sight on the shelf. A man in a suit places bullets into a gun cartridge, then loads a luger pistol, and takes aim at the target, he fires, the voiceover explains that it is frowned upon to take aim through the pistol barrel. We see the spectators watching.

A kettle boils in a room with a green brick wall. The jaunty music accompanies this sequence. Three ladies, one of whom is the blonde lady from earlier, enter and place a teapot and some cups onto a catering window. Two boys walk through a pair of large, decorative wooden doors. The blonde lady at the catering window. In a waiting area, we see about four young men and two older gents, the younger men try to wrestle their cups from a man who wants to take them away. The voiceover tells us the scorer has tallied everyone's results. Two older gentlemen who we are informed are Mr Brommel? of the Cine Club, and is presenting the cup to John Moncrieve? who is captain. Brommel is taller than the other and has a moustache. Moncrieve is a short balding man. They hand the handicap prize, which is a small silver cup, to Pete Loveday, a large stocky man, with short, curly hair. Another larger silver cup is handed to a man in a suit. The film finishes as the jaunty music continues.

Further information: Mr Victor Ashlee was a local resident and keen filmmaker. He lived at Eversley Avenue, Barnehurst and later at Caithness Gardens, Sidcup. His four children named Christine, Peter, Diane and Andrew were born between 1957 and 1969 and feature in many of the films in this collection.