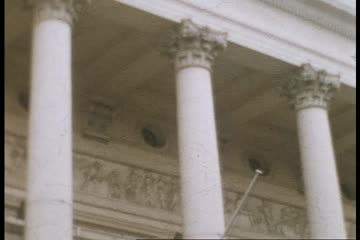 Description: A little girl guides us around some of London's landmarks including St. Paul's Cathedral and London Bridge. We also bear witness to novelty floats, a military parade, and people in Edwardian dress at The Lord Mayor's Show. the Show that year was themed "British Motoring". We see the family dressed up for an outing and the Trocadero at night.

The film begins on a rainy day in London, an impressive building with prominent pillars sets the scene, and crowds of people carrying umbrellas wander through the City of London. A girl with a multi-patterned woolly jumper stands by the Thames riverbank admiring the view with impressive trawlers and London Bridge in the background.

The procession begins, as a series of military bands pass by in full regalia. Of all the different regiments represented, there includes a Scottish regiment wearing bearskins and playing the bagpipes. Floats then pass with men and women in Edwardian dress, walking alongside or sitting in floats which celebrate the period. A series of impressive vintage automobiles from the same period drive through, followed by a number of novelty floats, and people carrying huge models of Stanley tools. A vehicle dressed as a cow, and a mock up of the Railton Special (which broke the land speed record in 1938) pass by, as do James Bond's infamous Aston Martin and other record breaking vehicles. A horse guards' parade then passes by, with an authentic royal coach.

The girl from earlier in the film then appears with some impressive views of St. Paul's Cathedral.

We are then shown some exterior views of a suburban London street. A Ford Consul pulls up as some local lads in suits pose in doorways. A lady with an 'Alice in Wonderland' bow gets into the car. A girl in a darkly lit room plays on a drum kit. The girl with the patterned jumper rides her bike down the street.

A middle-aged lady, Mrs Davis) with a 60s bouffant comes out of her house.

We see shots of a rainy West End and Thames Embankment – Waterloo Bridge is in the background – before we head to the 1964 Lord Mayor’s Show. This was a celebration of British motoring and classic British cars and drivers – from James Bond to Graham Hill – feature in the parade. Then comes proud film of the Davis’s own motor – a Ford Consul – followed by London’s Christmas lights, the Post Office Tower and Winston Churchill’s January 1965 funeral.

The film was shot by Haringey’s Davis family and found and donated by the new owner of the Davis family house. Although dated 1966, the principal action is from the 1964 Lord Mayor’s Parade. Among the vehicles shown is Walthamstow’s “Bremer Car” from the 1890s, the first proper British car. Also shown are John Cobb’s Railton Mobil Special, which broke the land speed record in 1947, a steam car, Formula One drivers Graham Hill, Jim Clark and Jack Brabham, a float celebrating the pneumatic tyre, James Bond’s Aston Martin DB5 and Donald Campbell’s Bluebird. We return to London for Christmas, with garish festive lights, Piccadilly Circus, the Post Office Tower and Odeon Leicester Square.