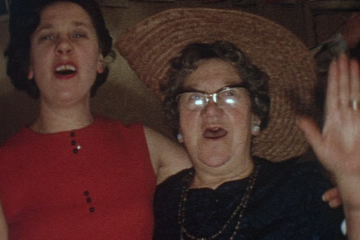 Summary: Home movie of a lively group of family and friends, ranging across three generations, holding a Christmas party. They wear party hats, dance and sing. One older lady shows off a pair of pink pantaloons, and later wears a "bunny-girl" outfit, to general hilarity. A man with a portable tape recorder sings into a microphone, and encourages others to join in.

Description: A party takes place in a living room, with Christmas cards hanging on the wall and a Christmas wreath on the door. A middle-aged woman in a sleeveless red dress dances with an older lady wearing a smart dark-blue patterned dress and straw hat, and sings along. A couple of men stand by the door in the background, the younger one getting ready to light a cigarette. The younger woman helps the older one to raise her skirt to show off her long-legged pink pantaloons, and she approaches the camera in a comic manner. They dance with the men, in pairs. As the lady in red sits out, another older lady in a pink top and pink paper crown, a happy young boy, and the woman in dark blue (though she has changed into a flamboyant, unravelling pink straw hat) dance and sing along, while in the background a man with a nearly empty glass of beer talks to someone off-screen. Another woman in a pink top and little red cap joins them, and the three of them dance and sing, gesturing to the woman in red to join them. Behind, the young man has a pretty blonde woman sitting on his lap, and an older man is laughing. The woman in the red cap dances with the woman in red, the lady in the pink crown and two other women: one in a cream dress and a fraying pink and green straw hat with a raised brim; the other in a beige dress with a faint black check design. The older woman from the first shot dances, balancing a tray of empty beer glasses; though she is now wearing a black "bunny-girl" outfit, with a silky black top, black long-legged pantaloons and a puff tail, to the amusement of the onlookers. One of the men, in a dark red cardigan and a cream top hat, dances with her and steals a quick kiss, before nipping out of the room past a laughing young woman in a beige pullover. As he returns, another man in a tiny fake policeman's helmet and dark cardigan puts his arm around the "bunny-girl", and kisses her on the shoulder. The man in the cream top hat takes a microphone and sings, touring the room, and inviting others to have a turn. He is wearing a portable tape recorder - the Norelco Carry-Corder 150 (I believe). The door appears to have come off its hinges at some point, and is now outside in the corridor.

Further information: The first portable tape recorder, the Norelco-Carry-Corder 150 was first released in the U.S in November 1964, and so the film must have been made after that date.

Wikipedia entry on the Compact Cassette

Catalogued/researched for LSA by Zoe Roberts