Where and What Is Paradise 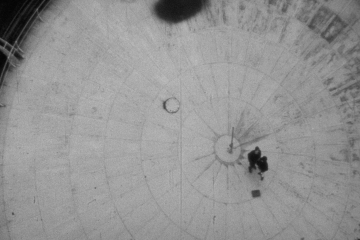 Summary: University project in the1960s about Brentford, including scenes shot inside the old Brentford gasometer.

Description: Opening title reads "Kingston College of Art Students Union Film Society Presents" followed by various shots of local newspaper headlines from Brentford. Opening credits read "a film by Chris Owen" and "assisted by Joe Ruddy, Julia Oliver, Simon Rees-Roberts." Opening shot is taken from the Thames river bank looking over towards the Brentford Gasworks, soon to be demolished. The river bank is lined with trees, behind which the huge gasworks tower over them through the mist, with sounds of traffic in the background. Boats and small warehouses are cluttered around the muddy riverbank, whilst behind this a huge gas tower dominates the skyline. Another, narrower chimney sticks up further to the eastern side of the gasworks. A street sign reads 'Middlesex'. Victorian warehouses are busy with traffic; cars and trolleys bustle around carrying newspapers and piles of vegetables. One truck is labelled 'Borough of Brentford & Chiswick' and we hear tradespeople chatting. A high street shop with a Victorian shop front called 'Young Son & Marlow' is revealed to be a Scalemakers as the camera pans up. The gasworks tower over and dominate the streets. Suddenly, we are ascending the gasworks; we see the huge height through gaps in a rusty metal staircase. The camera pans around the view to reveal the extraordinary height of the structure, looking down at the high street, terraced houses, Kew Bridge and the Thames, and the Church of St. George (this church still exists but is disused). The filmmaker Chris Owen, unseen, discusses details of the gasworks with another unseen man who has an unidentified accent, possibly Indian. Various shots of the industrial details of the gasworks follow, with the speed of cuts between shots steadily increasing to create the impression of a vast maze of pipes and bridges. With the camera now at ground level, we hear the recording of the filmmaker's conversation with two young girls (who remain unseen) as the camera continues to cut between images of the gasworks. The girls (one of whom, we hear, is seven years old) discuss how the gas works smell; this view is afterwards echoed by the voice of a woman with a strong London accent. More shots of neighboring warehouses, and children's voices. A lock, and barges, and Victorian houses and carts. Victorian houses with a large billboard for News of the World. A large, imposing Victorian house bears a sign for London City Mission. Close-up of a sign for Brentford Freeschool (erected in 1815). The Congregational Church, again Victorian, followed by more Victorian Neo-Gothic buildings including a Post Office. The focus now switches to people in the street, judging by their clothing in the early- to mid-1960's. Another voice is heard, explaining of the filmmaker that "he's making a film about Brentford, especially the gasworks because they're gonna be pulled down, and he's a big fan of Victorian architecture." The Beehive Hotel and Public Bar, a beautiful Victorian building with men drinking outside; a derelict row of Victorian shops with bow windows. Again, the main tower of the gasworks towers over the high street. The children can be heard talking about their sandwiches. A horse and cart goes down a street and a small car passes it. The children ask why they have a camera; the filmmaker explains that they are making a film about Brentford. A sign is seen for Distillery Road, then Pottery Road. Older women's voices claim the gasworks are an eyesore and should be pulled down. A sign for the Piano Museum, outside St. George's Church. The last shots again show the gasworks tower looming over houses as voices argue that the planned demolition works will improve the area.