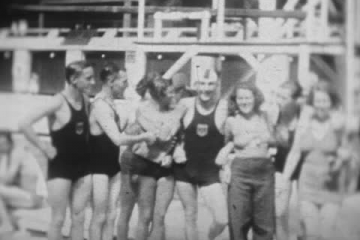 Description: Part 2 of 2 of the 4th International Games for the Deaf. This part documents sporting events such as swimming, diving, football and tennis.

Part 2 opens at the Civil service sports ground, Chiswick, with Men’s singles and mixed doubles games of tennis. This is punctuated by a short sequence showing athletes relaxing on deck chairs, laughing and enjoying the camera’s attention.

At Empire Swimming Pool athletes from various teams stand around the pool beneath the diving platform posing for the camera, conversing in sign language and shaking hands. The camera does a wide pan of the pool before capturing a front-crawl race. A German swimmer stands in the pool, looking towards the camera. The sequence continues with various elements and styles of swimming races.

A sign language conversation between the games secretary and another formally dressed man take place poolside, before the filmmaker cuts to the stands and the crowd who are watching the swimming competitions.

Harold Dutch Smith makes two dives from the high board and other competitors can be seen hanging around the pool. A series of group shots: a group of smartly men and women, likely officials, standing outside one of the venues; the rest are of the swimmers posing poolside.

Swimmers mess around in a rowboat. A swimmer is then captured being pulled up into the stands and once on his feet a spectator shakes his hand. The sequence closes with competitors horsing around for camera outside the Empire swimming pool.

CAPTION: Football at Chiswick - one of the 1st round matches

A football match in full flow: players jostle for the possession of the ball, the keeper weaves between players to kick the ball downfield and a player hits the ball into the opposition’s box. A pan sweeps across the stands – the game is well attended and several fans wave to the camera.

The second game is of more significance, with both the English and Belgium team lining up beside the official and the games secretary standing between the two sets of players, signing. The camera then passes over the line-ups before the two captains are introduced to each other and the referee. The film closes with a coin toss.