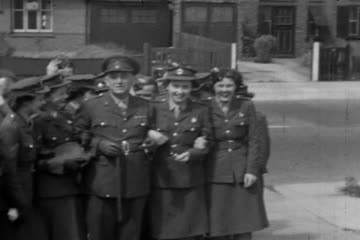 Summary: A light hearted, informal and romantic film of the wartime wedding and reception of Charles Holmes to Edith Burgess in Kingsbury.

Description: Wedding of Charles Ronald Willy Holmes (age 25) and Edith Frances Burgess (age 23, known as Frances) at St Andrew's Church, Kingsbury (now in the London Borough of Brent). Both the bride and groom were in the forces, and almost everyone in the film is in uniform. It is a very informal and happy affair. A group of wedding guests, including a Colonel, are seen walking, linking arms in groups and in couples towards the Church, smiling as they go. There is a scene of some of the wedding guests talking to each other and laughing and giggling. The following shot is of the bridal car arriving at the Church, the bride and bridesmaid (who is not in uniform) get out of the car. The bride and groom, now happily married, are seen walking out of the Church and posing with the wedding party. The bride and groom get into the car, and the wedding guests’ wave them off.

The bridal car arrives at the wedding reception, which is in a pub. The Colonel and other wedding guests are seen laughing and smiling sitting on a sofa with the bride; the majority of the group are smoking. Outside the pub there are various scenes of couples in the wedding party joking together and passionately kissing, which includes the bride and groom. This is followed by a very light-hearted scene of some of the women jumping on the Colonel and playfully falling to the ground. The scene is repeated with another male soldier, with the group of women and man all falling over, laughing and picking themselves up again. Other male wedding guests befall the same fate with the group of women tumbling them to the ground, and kissing them on the cheek and laughing as they lie on the ground before being picked up again. Next, there is a shot of the entire wedding party outside the pub laughing and chatting, with a focus on the bride and groom. The bride and groom kiss romantically and laugh and wave. There is a scene of the groom staring lovingly at his bride, the film ends with a few clips of two wedding guests.

Further information: The bride-groom, Charles Holmes was in the Royal Army Ordnance Corps (RAOC). The corps dealt only with the supply and maintenance of weaponry, munitions and other military equipment (such as the repair of Army equipment) until 1965. It also dealt with bomb disposal during the Second World War, when Charles was working for the unit. Charles Holmes was in the training department of the RAOC, which made training films. His niece, who donated the film, assumed this was why his wedding was filmed. He lived on Rucklidge Avenue, Harlesden, and his bride Frances Burgess lived on King's Drive, Wembley.

In galleries: Love and Marriage; It's Your Story!