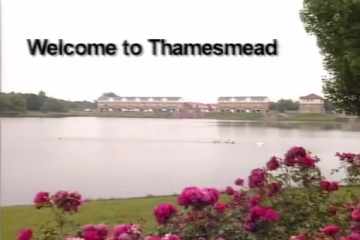 Summary: This video shows Thamesmead in a period of growth and development. Presented by Anna-Maria Ashe of London News Network.

Description: Presenter walks towards camera extolling the virtues of Thamesmead, England's most surprising New Town. Next is a view of a large lake with swans; a title appears 'Welcome to Thamesmead'. The presenter (Anna-Marie Ashe) explains that we are 12 miles from Charing Cross and the film shows people fishing and exercising at a gym; such are the benefits of Thamesmead. She describes the different styles of architecture and the views across the green spaces, and also the lakes and Thames as well as the open spaces which are all available. We see people fishing, sailing on a lake and people in kayaks.

We next see a Safeway's supermarket and then residents enjoying a drink at the 'Cutty Sark' pub. A shot of a shopping precinct with children climbing over a mock cannon is followed by a sweeping shot of new houses and flats. The commentary explains that residential growth is balanced by growth in job opportunities. We see an interior of a new house as an example of the housing that is available. The commentary describes that there

are over 200 business already situated in Thamesmead.

We see a young girl walking along a river path and then the commentary describes plans to develop a new urban village to be called 'Gallions Reach'. This is shown by a artists impression of the area. There will be a man-made 'hill' that will offer views of the surrounding area(s) and the river.

The presenter speaks to camera explaining that a new Thames bridge will be built which will emphasise Thamesmead's role in the Thames Gateway. We see more shots of swans and the commentary explains that Thamesmead is a balanced community.

She goes on to say that there are fourteen schools in the area; we see a childrens' sports day with children learning karate and cheer-leading.

We see a secure entry system for rented accomodation and pages of the local newspaper especially produced for Thamesmead residents along with a shot of it's local radio station.

The commentary explains the good transport links to the City and a we see a map of Thamesmead's location. As an example of a business that has moved to Thamesmead, we see the office of 'Ferndale foods'. The Managing Director, Richard Hallett, explains why they have moved there and the benefits thereto

Next we see shots of resident's enjoying a swimming pool and gym.

The presenter, Anna-Maria Ashe speaks to camera saying that the future is good for Thamesmead.

A graphic appears 'Thamesmead: where London is coming to life' followed by the production credits.