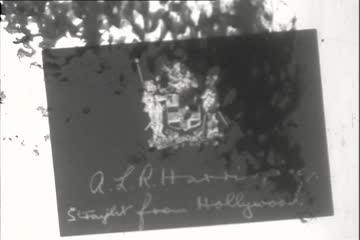 Description: The opening shot is a shot of a card signed 'A R Harris, Esq straight from Hollywood' followed by the back which has various signatures. These shots appear to be negative. We then see title cards stating ' Honourable Artillery Co. 1537-1937'; titles by Thos W. Gate; and 'Presented by Arthur Harris ARPS'; 'The Fourth Centenary Bisley 1937'.

We see various shots of soldiers chatting and smoking and generally milling about.; some civilians look on and chat. A sergeant is seen laughing and joking. The soldiers are then seen lying down and aiming whilst officers look on. One is sitting on a shooting-stick and is then seen talking; more officers are seen milling about and talking.

A title shot stating 'The Fourth Centenary: The Rt. Hon. The Lord Mayor, Sir George Broadbridge inspects the A. & HAC'. The Mayor alights from his horse-drawn coach and is welcomed by an officer. The mayor is introduced to the officers and then inspects the troops.

A title shot stating 'The Fourth Centenary: ----Take a Peep at this One----'. we see a shot of two couples laughing and talking followed by a shot of the mayor talking to soldiers.

A title shot stating 'The Fourth Centenary: One of every kind to make a world'. We see a man in tribal dress walking along with a donkey. The next shots show soldiers in First World War uniforms, firing (Vickers?) guns and then donning gas-masks. Officers are seen on horse back and then cannons are fired. They are then drawn away by horses. Troops are lined up at attention and an officer raises and lowers his sword and then the troops march off.

A title shot stating 'The Fourth Centenary: True Pageantry'. A marching band march around the parade ground followed by various soldiers, some carrying flags including the stars and stripes of the USA. More shots of marching soldiers in historical costume from different eras.

A title card stating '21 Years After. September 1935. About 200 veteran members of the original battalion again embark for France.' We see a flag fluttering followed by men disembarking from a boat. They are then appear to have a 'comfort break' at the side of the road by a coach/bus.

A title card states 'St. Omer'. We see views of the town square with parked coaches and people. A road sign says Calais Boulogne Dunkerque, with a pointed arrow.

A title card says 'Ypres, Menin Gate, HAC Panel'. There are various shots of the Menin Gate and close ups of the inscriptions. Four men are seen leaning against a parapet just by the memorial. A shot of a church spire is followed by more closeups of the inscriptions of the those who died in battle. This is followed by another shot of the memorial.

A title card says 'Belgian War Memorial' We see a shot of a Belgian war memorial followed by a shot of a plaque stating 'St Georges Memorial Church' and then views of the church.

A title card says 'Tyne Cot Cemetery'. There is a close up of the inscription above the entrance to the cemetery.

A title card says 'Colonel E.Teffry signs the book'. We see a dark shot of a man signing the book and then wide angle views of the cemetery and people strolling along the paths.

There are general views of the cemetery and then a shot of three crosses on a mound. We see a grave marked with a cross which is inscribed 'Unbekannter Deutsher Krieger' (unknown German warrior) followed by a gravestone of an unknown soldier. There are more shots of gravestones.

A title card says 'Panorama from German Lines. "Ypres Salient" Kemmell, Locre, Poperinghe, Ypres, Zillebeke, St. Jean, Hooge, Zouave Wood, Sanctuary Wood'. There are various shots of fields which were, presumably, battlefields. There is a shot of groups of smiling men in front of a line of coaches.

A title card says 'Staff Car'. there is a shot of a car and then a line of coaches.

A title card says 'View form Hill 60'- again more shots of fields and a shot of a group of men on top of a lookout with a Union Jack flag flying in a strong breeze.

A title card says 'Pool of Peace, Lone Tree Crater', we see a shot a large crater filled with water followed by a shot of a board with a description of how the crater was formed (Large land mine explosion)

A title card says 'Looking for "F" trenches'. There are large groups of people milling about and then we see people walking down a country road, towards the camera. A road sign says Wijtschate and then Kemmell.

A title card says 'Kemmell Cross Roads". We see a cross roads with a long road ; the camera pans to the right to show another road. There is a gravestone which the inscription states is J.L.Elmslie, 11 March 1915, age 16, a member of HAC. There are more shots of a war cemetery.

A title card says 'Convent, Locre'- again more shots of people by a war cemetery followed by shots of groups of men. We see two men investigating the remains of a tank and then an exterior sign that says 'Hotel Continental' with groups of men standing around.

A title card says 'Burgomaster(sic) of Ypres and colonel', we see the two men shaking hands and chatting away.

A title card says 'Safe Return', and we see the men getting off a boat at, presumably, Dover.