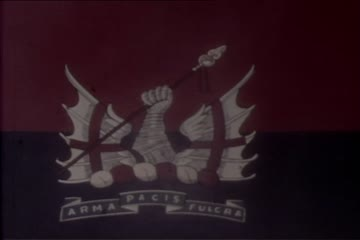 Description: This film is set in Cyprus.

The film starts with the emblem of the HAC (Arma Pacis Fulcra) followed by a sign stating Honorable Artillery Co., Alexander Barracks.

The next shot is of two soldiers priming grenades, throwing them and then watching the grenades explode. Next is a shot of a soldier speaking into a radio and then various shots of troops with machine guns practicing on a firing range. Various officers and trainers look on as the soldiers practice firing guns whilst standing up. Soldiers are then checking the targets and counting the hits. The next shots show soldiers preparing and firing mortars.

The following shots show soldiers clambering on what looks like a makeshift boat at sea and then men preparing to water-ski at the beach. We see a motor boat towing a skier who then lets go and skis towards the beach.

Four soldiers are seen walking down a palm tree fringed road and then enter a building; they are then seen sitting at a table at a beach-side cafe under an awning, having a drink. The next shot shows soldiers being lining up and being served at a canteen. There is a close-up of a man in glasses and close-ups of food (mashed potato?) and a chef. The soldiers sit down and enjoy their meal.

The next shot is outside where soldiers are sitting down watching a pig (or lamb) that is hung up and is being cut up. The carcass is seen being sawn in half and the troops look on. What looks like the cuts of meat are handed out to the troops and then we see a camp fire with presumably, the food being cooked. We see a soldier with a dead chicken which he shows his comrades. The chicken is then seen being plucked. The next shots show vegetables being cut up and prepared. The soldiers make kebabs of the meat on long sticks and then cook them over the fire. A soldier is seen eating the food out of a mess tin.

The next shot shows soldiers being instructed in the use of guns and adopting a kneeling down position. There are various close-ups of soldiers faces looking down the barrels of their guns. They are then seen firing their guns at a firing range and then we see them walking towards the camera in a line abreast. The next shots show a sniper lying down and shooting at the advancing soldiers; they immediately lie down and start to fire back. We see a soldier talking into a back-pack radio and then we see an officer(?) giving out orders and then the troops get up and run towards the sniper. One of them pretends to stab the sniper. The final shots show the soldiers sitting down and eating .