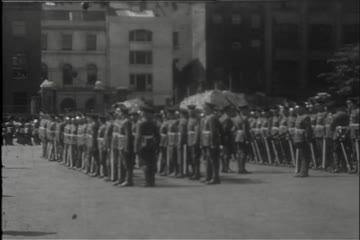 Description: Part 1: King's Guard 1938. Troops are lined up for inspection as an officer with a sword marches past. Another shot shows the cavalry lined up, with a crowd seated to one side to watch the manoeuvres; there appear to be a large number of women in the crowd judging by the wide-brimmed white hats visible. Infantry marches to one side across a large field, behind which are high Victorian houses (or barracks?). As guards with helmets and sabres march past, the Kodak Safety Film logo flashes up backwards and the screen fades to black.

Part 2: Queen's Guard 1958. Outside Buckingham Palace on a rainy day, crowds march past (the film seems to be somewhat sped up). Many spectators carry umbrellas as a large formation of soldiers marches past and into the gates. A troop with flags marches toward the camera as cars drive past. A solider stands to attention on Whitehall. A large stage has been set up where assembled dignitaries sit to observe, possibly including the Queen. They stand as the troops march past.

Part 3: 400th Anniversary Celebration, 1937. We briefly see an upside-down board on which is written "Words & pictures - up in the attic". Main title, professionally made, reads "A Cine-Kodagraph - Made in Great Britain - A Kodak Product". Next title: "Business Men mount guard at Buckingham Palace (Pathe Gazette)". Guards with bayonets line up inside the Buckingham Palace gates, as soldiers march in and march in formation in front of the palace. Some wear tall bearskin hats.