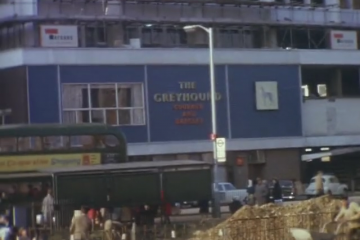 Description: The Croydon Underpass is part of the A212 beneath the junction of George Street and Wellesley Road/Park Lane, consturcted in the early 1960's to ease congestion on Park Lane. In the opening shot, we see a roof with a copper-green churhc spire in the foreground, behind which are 1960's tower blocks, one under construction (possibly the Nestle Tower, completed in 1964), and a large red crane. The camera pans right to show another large white tower block, before continuing to pan across Croydon.

After a cut we see Norfolk House and Suffolk House (both large mid-century office blocks) in the background with a building site in the foreground. The camera cuts to a shot following a green double-decker bus driving past, and in the background we can see the base of the Nestle Tower, part of which is the blue wall of a venue called The Greyhound. The Greyhound on Park Lane (opposite Fairfield Halls) was one of the most important music venues in South London in the 1960's-70's, hosting acts including David Bowie, Queen, Roxy Music and Deep Purple.

The camera continues to pan right until we see Fairfield Halls (an arts, entertainment and conference centre opened in 1962). There is a large amount of construction going on. The camera zooms in on the top of Fairfield Holls, where the name of the building is written in large capital letters next to the Croydon Coat of Arms. The next shot is of Croydon Clocktower. We see a poster for Ashcroft Theatre (part of Fairfeild Halls) then a shot of a large open building site surrounded by tower blocks with Fairfield Halls on the right. Builders set concrete into metal supports, with Norfolk and Suffolk House in the background, and another double-decker green bus drives past. We see The Greyhound again. Another shot of the Clocktower, followed by a shot of SEGAS House, a large grey 1930's Art Deco building also on Park Lane, with a large yellow GAS sign on the front; the camera pans right and we briefly see The Greyhound to the right of SEGAS House.