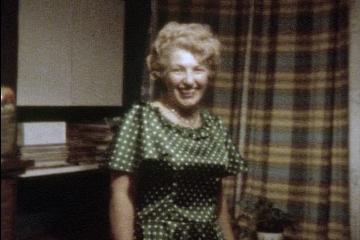 Description: A middle-aged woman in a living room sits writing - she is wearing glasses with a chain and a patterned blue jumper, with a glass of wine on the table. Another woman, wearing a polka-dot green dress, laughs into the camera, then dances with a man. Another woman wears a stripey black-and-white vest. Whereas the old people at the party are dressed quite formally (the men in suits, especially) the younger people are dressed very casually. A small child in a yellow jumper runs in front of the camera, then hugs a small girl in a pink dress. Another child in a white dress holds a large glass of something. We see a small Christmas tree in the background by the window, with the children playing nearby in front of a metal 70's gas fire. The kids wear paper party hats and eat chocolates. One man wears a yellow shirt, brown jacket, kipper tie, glasses and a typically 70's hairstyle. This all takes place in a crowded front room; the party guests all seem to know each other, presumably relatives. Another man wears a white patterned jumper and has a very 70's moustache, hair and glasses. Guests pose for a family picture, and we then see photos of the children lined up on top of a piano.

Cut to two young girls wearing white first communion/confirmation dresses with white veils; they laugh and hug as family members stand behind them. We then see a middle-aged couple dancing in a very large garden (large trees in the background and a black cat running around). A man in a white shirt then rides around a motorized lawnmower.

Three women and a man, in a shirt and tie, are then seen trying to walk down a grassy hill, presumably on a family day out. The women are also smartly dressed in summer dresses. They try to climb a tree, then we see a hand-painted wooden sign which reads 'Hope Pickers only allowed on'. It is a bright summer's day and we see a row of wooden huts in a field. We see some of the family from earlier, then shots of hop-pickers with scythes cutting branches - one drives a tractor with a crane at the front to allow two men to reach the higher branches; most of the men are shirtless.

Back in the large garden, a man teases the black cat, which lies on the grass and scratches at him as he waves his hand. A red-headed woman wears a bright-green dress-suit with a blue hat and white handbag; she dances for the camera and we then see her talking to a black woman who wears brightly-striped purple trousers.

Next shot is of a building that looks like a converted but empty pub, followed by an interior shot of a large red flower (an orchid?). Another family occasion, with children playing indoors and looking into the camera. Next shot is of masses of flowers, brightly coloured in the sunshine, and a tortoise in the garden. We then see the pub again, though now it appears to have been totally renovated, the brick upper part covered in white and the red lower-half repainted. 'Princess Royal' is now written in large red letters on the side of the building. An older woman puts on a shawl in a living room. Back outside, a tortoise walks down a flowery garden path, the footage sped up to make it appear to be running. More shots of brightly-coloured flowers in the garden, and a white cat running up the path.

We now see a large indoor setting, maybe a community hall, set up for a large party. All the adult guests are in fancy dress, drinking and dancing. A Christmas tree and Santa decoration is set up behind a buffet table laid out with drinks. One man is dressed as a hippy, another as a cowboy; a woman sits dressed as a nurse. Guests dance to the Birdie Song. One man dances dressed as a punk rocker with spiked-up hair.

Close-up shot of a bumblebee on a leaf in a sunny garden, followed by a tortoiseshell butterfly. Various shots of Kew Gardens, including the pagoda.

Next shot appears to be outside London since the camera pans across the countryside with hills and forests stretching into the horizon, possibly shot from the top of a hill or tower. A picturesque country cottage with thatched roof is shown: Bosun's Cottage, 43 Corfe Road, in Stoborough near Wareham, Dorset. After a shot of the front gate we see flowers in a wheelbarrow in the garden.

Indoors, we now see a projector(?) followed by a large interior room in what looks like an old people's home or hospital (possibly Croydon General Hopspital, London Road). A Union Jack cake suggests that this must be a party to celebrate the 1977 Jubilee. Nurses dance with patients, some of whom wear dressing gowns. An older man and a woman formally cut the cake.

Next, we cut to a park in a residential area where a large number of children are in fancy dress to celebrate the Jubilee. One child pushes a pram decorated with Union Jack flags. Children's costumes include a nun, a Honey Monster, a dice, liquorice, Noddy, a king, a witch, a princess, Britannia, a flapper, a gladiator, the three little piggies, a coin. An adult man dressed as John Bull holds a small video camera, and another man sits on a decorated chopper bike dressed as a clown. One child holds a sign which reads 'BGRA [Broad Green Residents' Assocation] Salutes the Queen', complete with a picture of Elizabeth II's face. There is then a procession of all the children in costume. The colours red, white and blue dominate the costumes and decorations.